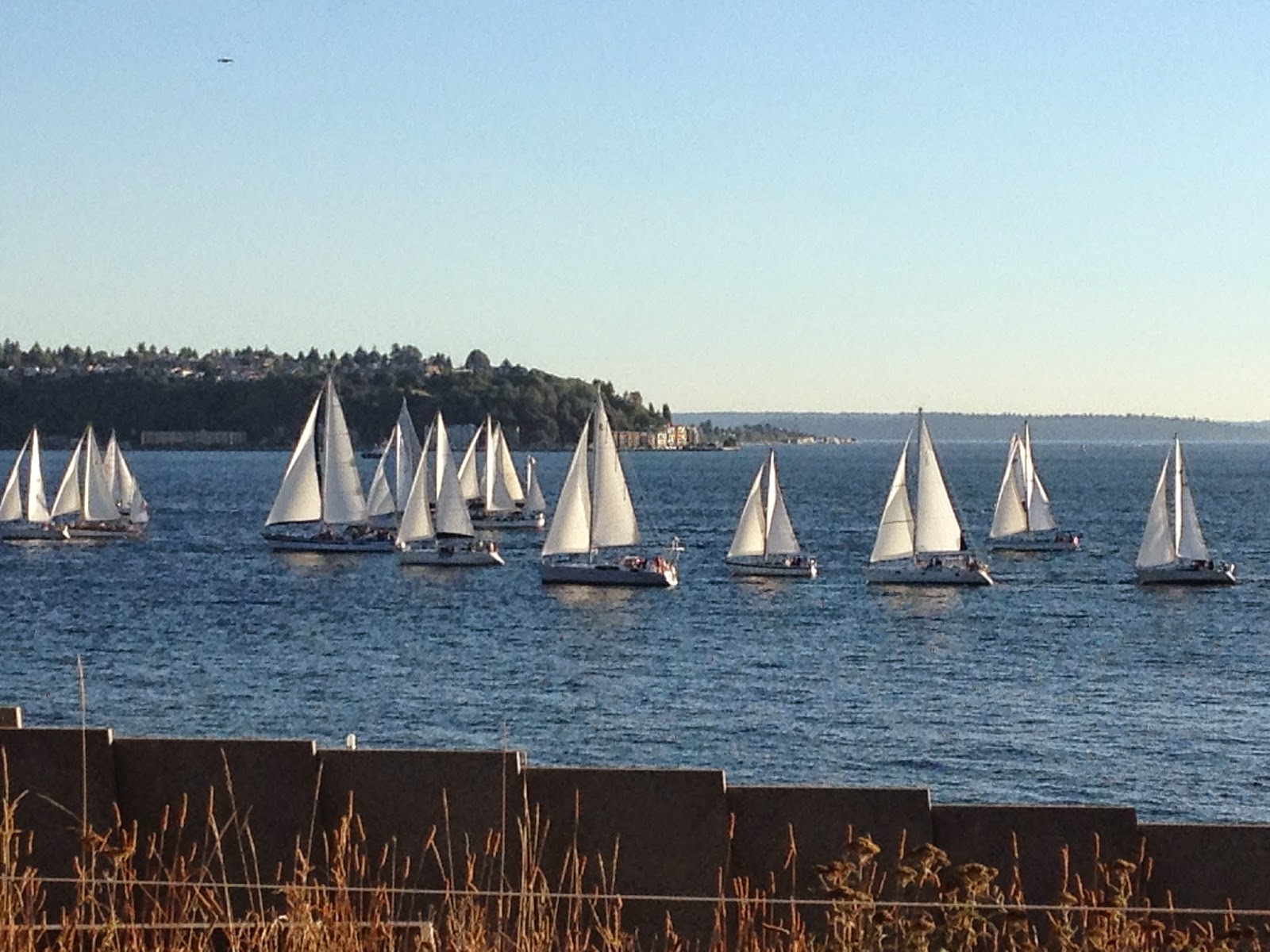 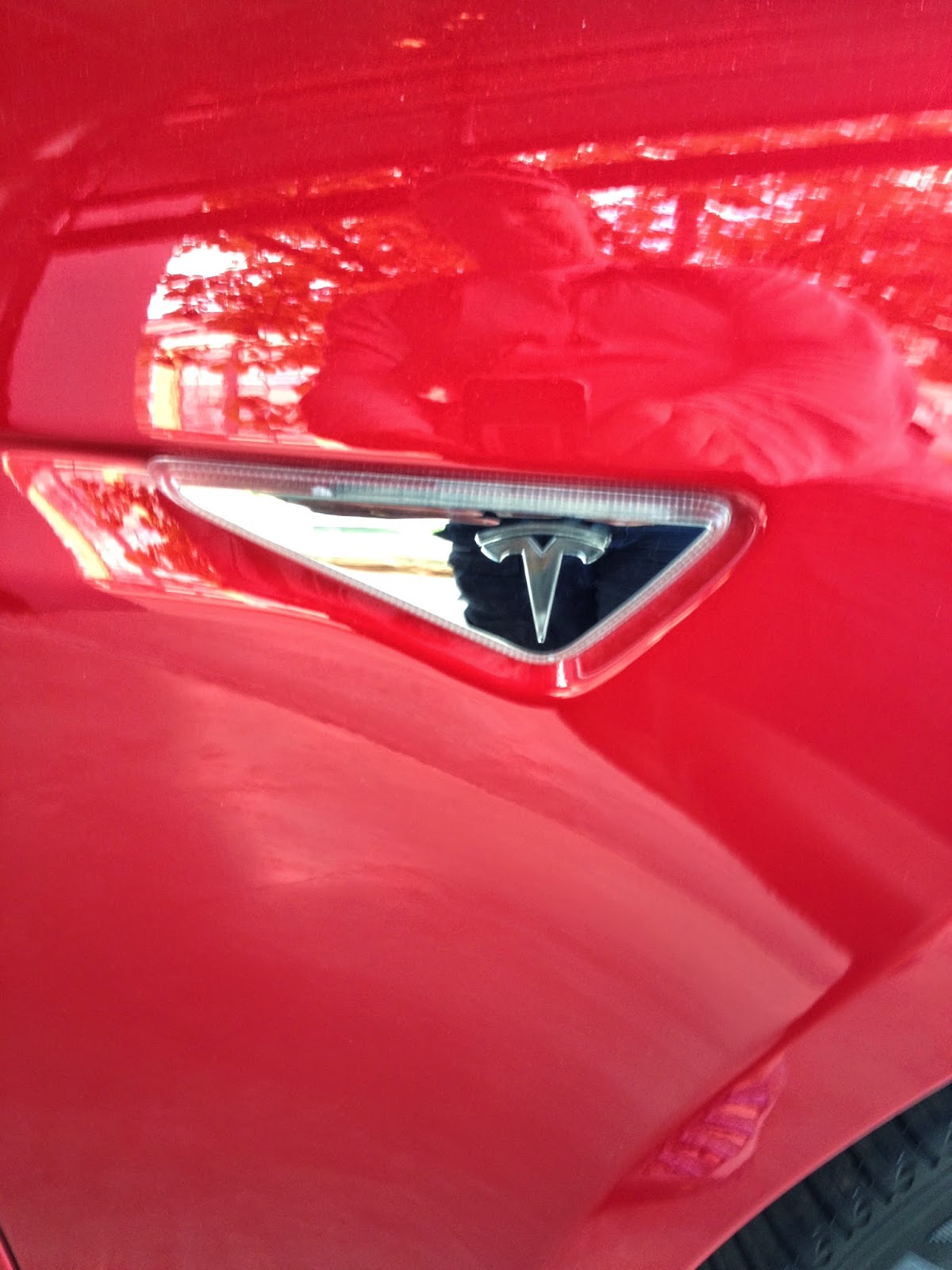 June was great but Peak time in Seattle has to be July, fun and usually free stuff to do in every direction always outside to enjoy the best Summer weather anywhere Just as they had a very Mild winter for us, the Summer is one of the top three in the last 20 years. The Seattle natives are very happy about it and they love to talk about it.
Our Monthly summary blog post provides a place to post all those moments that did not fit in with the other blog topics, it also preserves a lot of memories for us that we want to keep in their place. We take a lot of pictures, almost every day. I am really glad we started this blog so that we would have a place to post the pics and share them with all of our readers. it is a great way to organize memories and life adventures. We hope they stimulate your own adventures. I encourage you to start your own blog not only as a free place to store all your pictures but as a great way to share with family, friends and even many you may never have the opportunity to meet around our planet. When I wanted to start blooging I was unsure how to even get stated but we had just a friend through the Bay Yacht Club in Corpus Christi, Tammy Swart. She had a blog and after reading hers I knew I wanted to get one going. She met me at the Bay Yacht Club's clubhouse and showed me how to post pics and other tricks on Blogger.com the rest is trial and error. What else are you going to do with all those pics anyway? This is way better than filling up lots of family albums with all those paper copies of photos. What happens to all those family albums when you fade away into the sunset? Your Blog will be here for all those Great, Great, Great grandkids you never got to meet.
And if you do start a blog, please leave a link to it in the comments!
Posted by SNOWBALL at 3:56 PM No comments: 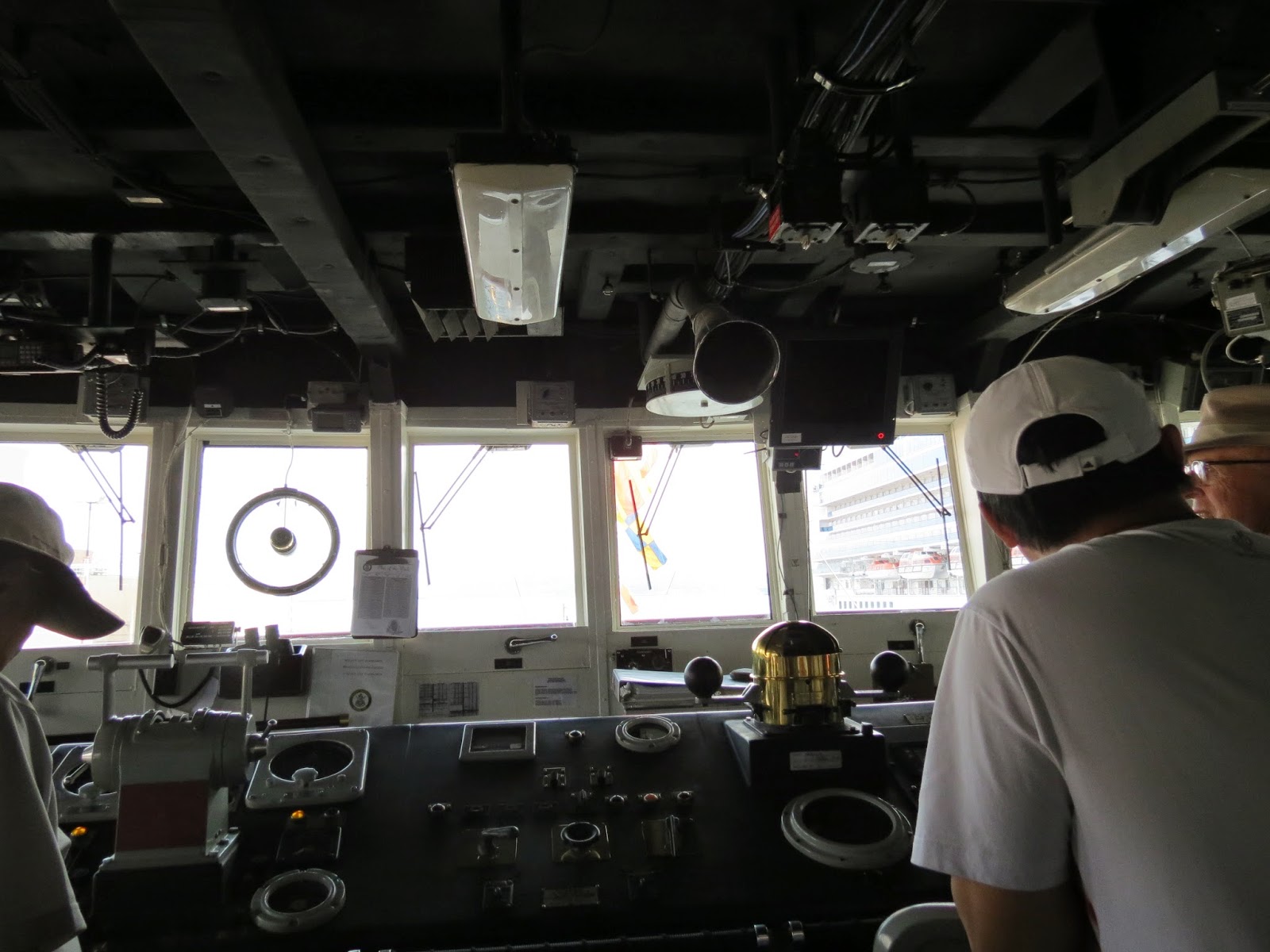 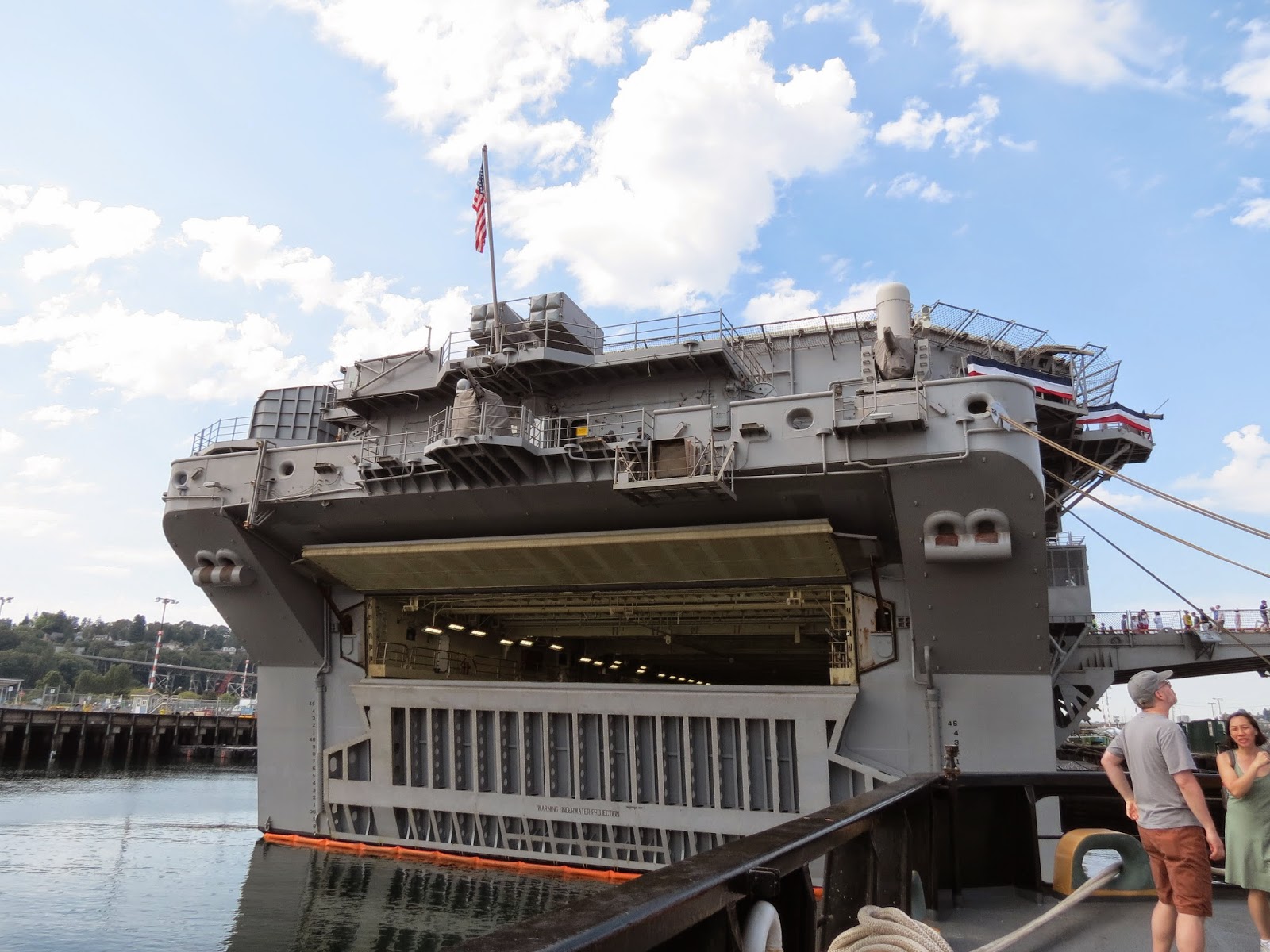 WHEC stands for High Endurance Cutter.which means they can stay at sea a long time, they have a 14,000 Km range carrying just over 203,000 gallons of fuel. Since Seattle is the homeport we often see the Mellon arriving or departing Elliot Bay so it was very cool to tour this vessel.
These Coast Guard sailors were the most relaxed crew of the three American ships we toured. Besides the more common Search and Rescue missions these guys do the Policing of the fisherman in Alaska and drug interdiction along the Latin American coast. With the updated weapon systems aboard they can certainly manage Homeland security issues as well. After 9-11  "the Department of Homeland Security (DHS) was created through the integration of all or part of 22 different federal departments and agencies into a unified, integrated Department" Check out http://www.dhs.gov/who-joined-dhs. It is very common to see the Small Coast Guard RIB's escorting the Washington State Ferries and or escorting ships through Puget Sound.
The "Coasties" were more chatty and they allowed the fun side of their job to come through on the tour of the  Mellon as they sometimes confessed to the practical jokes they played against each other on board.they had the same proud manner as they described the various tools on board the Mellon and certainly the professionalism. but at the same time they smiled and had fun with their assignment.  Three totally different experiences on three completely different types of ships. I am sure there are many reasons for the differences but every vessel has it's own spirit, it's own traditions and definitely the seriousness of it's mission. Then there is the CO setting the tone and expectations of his or her crew. Just having the opportunity to sail with many different people in either a day sail, a weekend cruise to somewhere, or racing, each skipper that I have crewed with is different in how they relate to and manage their crew. Participating in achieving a goal in a team environment always has the human side, not every skipper can be the best one and not all the crew the most competent and committed. Commanding any of these Military ships is a huge responsibility where even a small mistake can have big consequences. The men and women we met take on this challenge fearlessly and proudly.
Surely other ports offer opportunities for the average citizen to tour these military ships. This is the first time that we have been in the right place at the right time. Since Fleetweek is a annual event you could plan to visit Seattle during the summer to take advantage Or perhaps you could check out the other Homeports at http://www.navy.mil/navydata/ships/lists/homeport.asp and look for opportunities there,
Posted by SNOWBALL at 10:50 AM No comments: 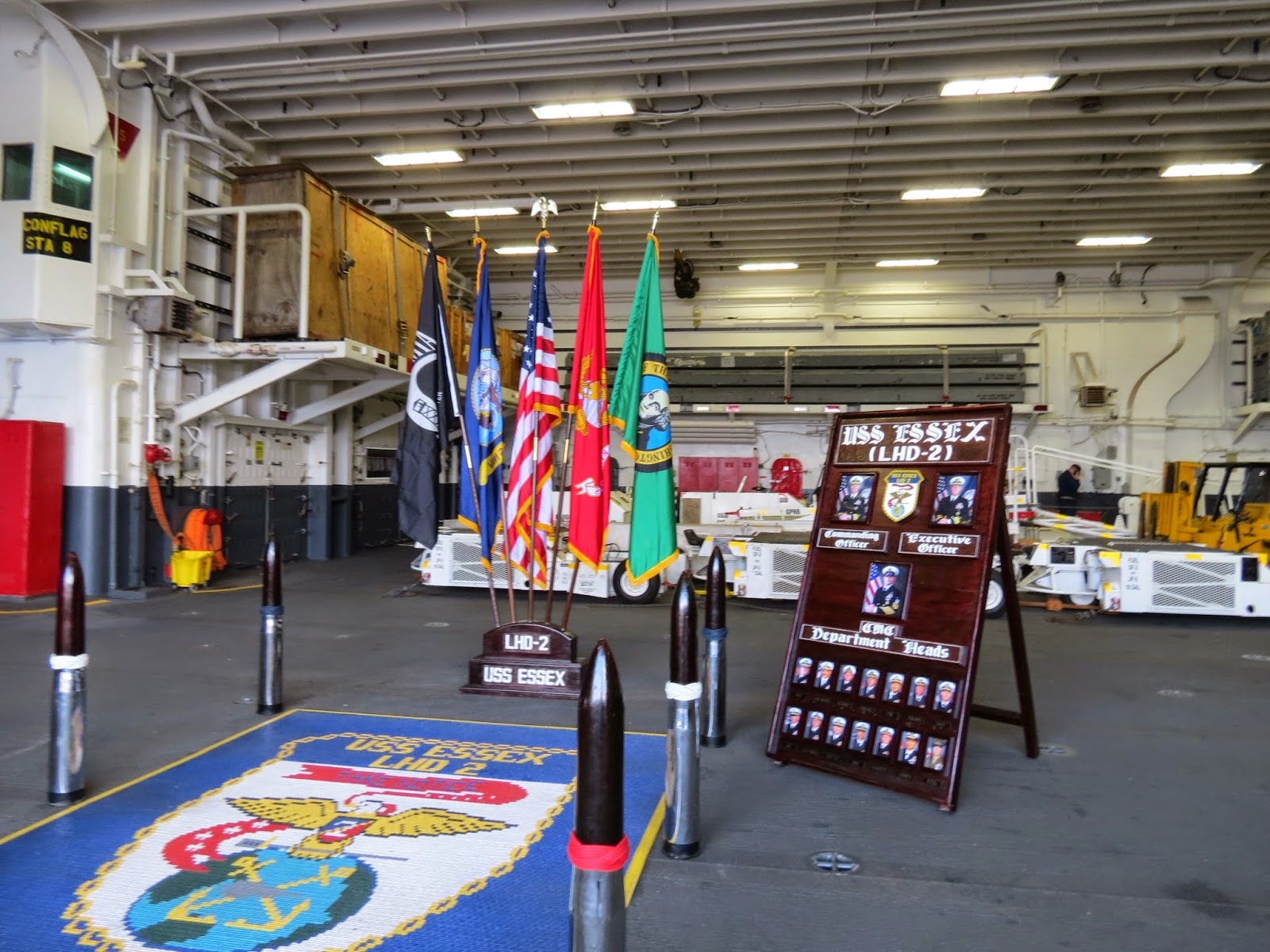 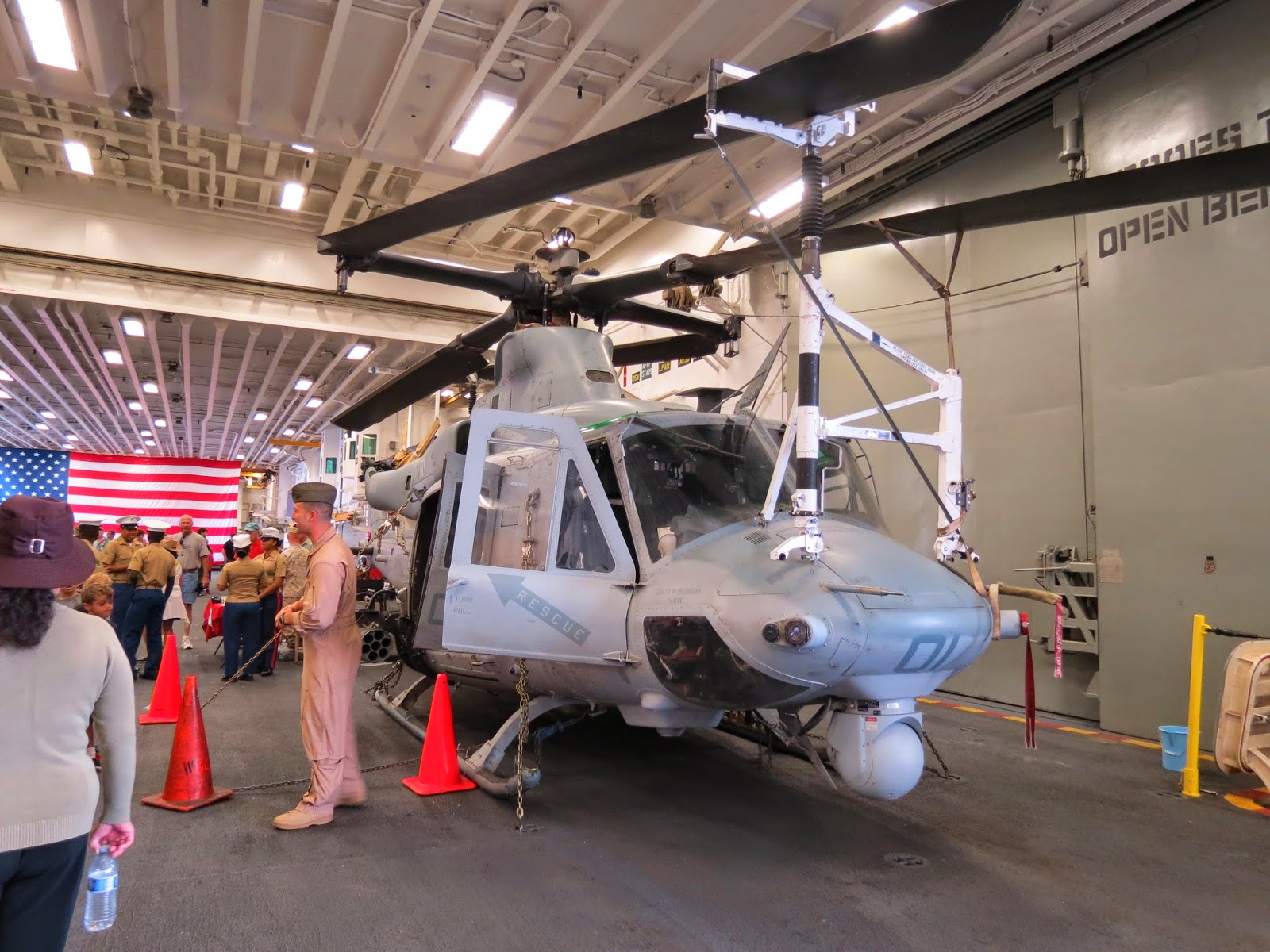 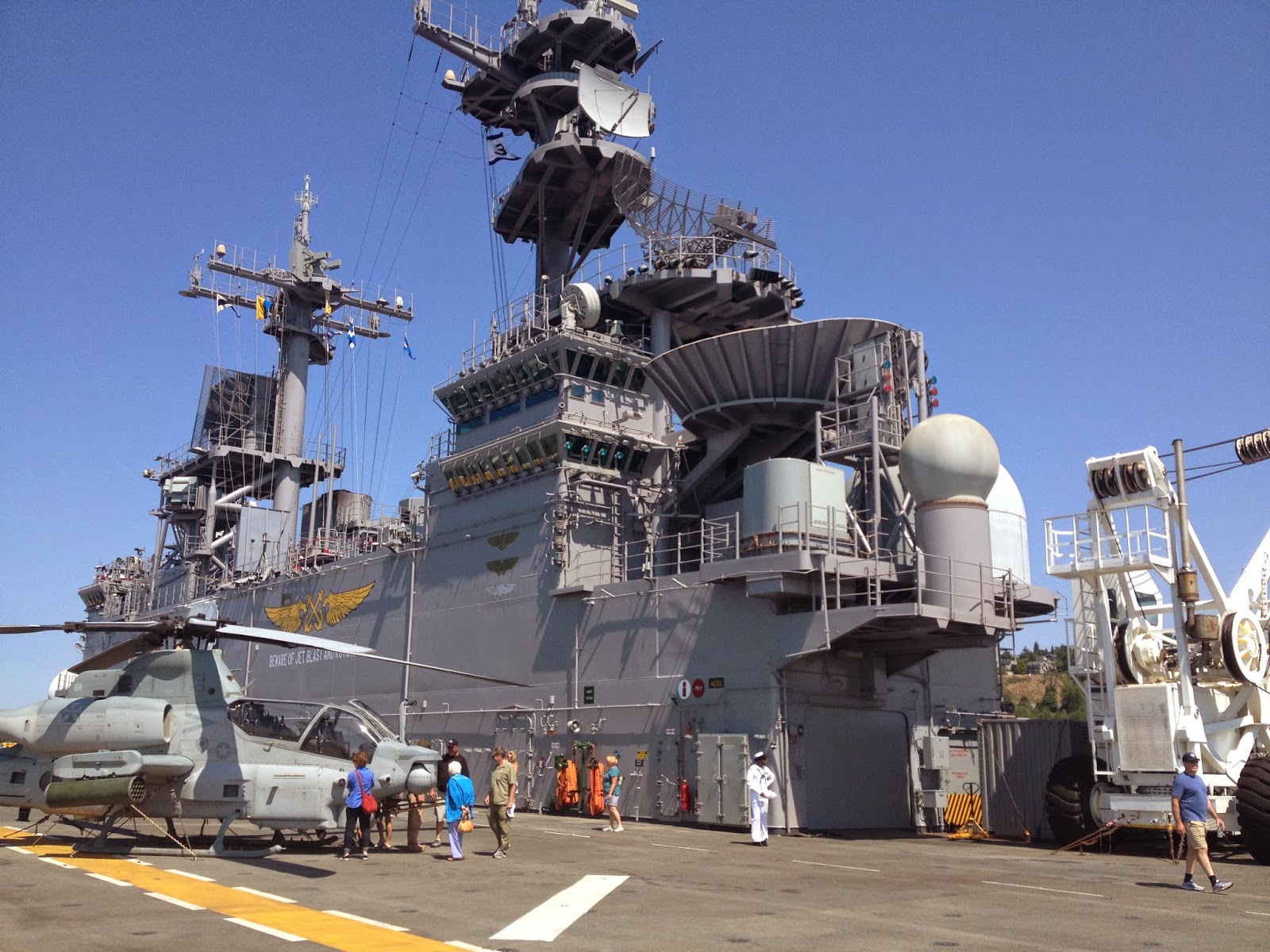 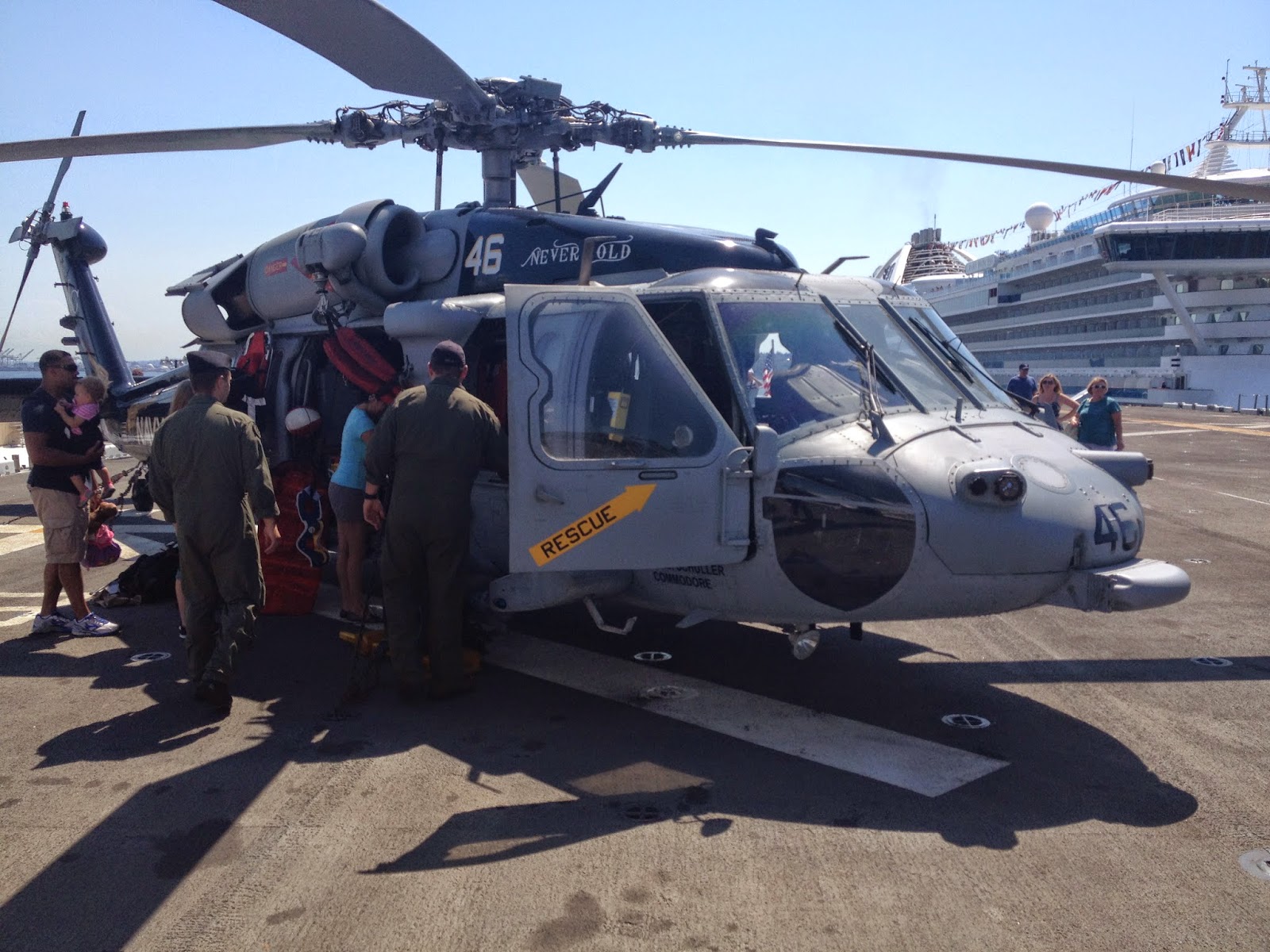 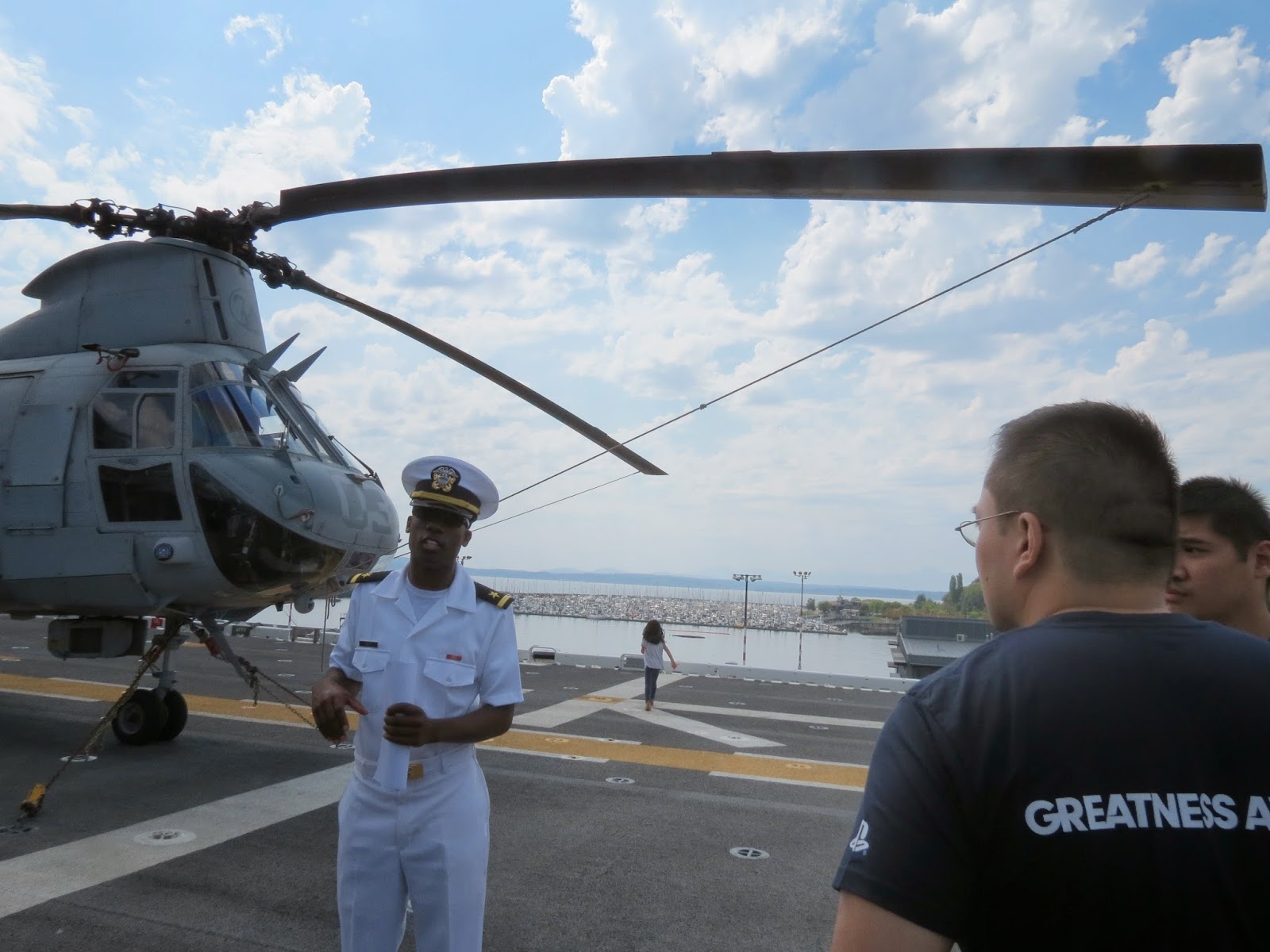 The Essex was the largest of the Military ships displayed and giving tours during Fleetweek. After touring the Canadian ship and The USS Howard I was sure this would be the most impressive. What I thought was a Aircraft Carrier I learned was WASSP Class Amphibious Assault ship. The crew include 1,200 Navy and 1,800 marines. It was obvious though that most of the crew had not made the trip from San Diego to Seattle for Seafair. I learned from our guide that the ship had just come out of  Dry dock and this was her first trip since a lot of repairs. while I waited almost two hours in line to board I watched as van after van of Navy and Marines were dropped off and boarded along with their gear. The Atmosphere and mood among the crew was very different from what I experienced on the USS Howard.
Our guide was a Petty Officer 3rd Class. She said she was just recently assigned to the Essex and she did not seem very happy about it. I asked her about the ships mission and what they would be doing after they left Seattle, She said they would go back to San Diego and spend another year just completing repairs to the ship. I asked her if they would be fully staffed when they left Seattle and she said yes but they would need a lot more to get this ship back into shape.  She mentioned that the Budget Sequester had delayed things and thought that perhaps the current military budget prevented the ship from just being replaced with a new one. I told her I sensed a different mood among the crew and she said non of the officers are happy about being here, and I stopped my questions at that point and only imagined that if you were an officer in the Military sitting at dock for a year was not the sort of assignment anyone in the military would wish for themselves. I was able to talk to her since she did not really do a tour, she just led us to the different areas of the ship that we were allowed to visit and sort of stood there while everyone sort of did a self tour taking pics, perhaps since she was new she didn't know anything about the ship either?
Our fist stop was on the Hanger deck, There were two huge refrigeration units about the size of a 18 wheel truck trailer. Not sure if they were for Air conditioning or some kind of remote refrigeration but there were several men frantically working on the units and you could tell from the way they were communicating with each other that they were not happy.  The rest of the tour we encountered lots of crew that were not at all part of the ship on display with 100's of visitors boarding it was a strange mix of civilians just kind of wondering around and the crew completely engaged in just preparing the ship to depart Seattle the next day. You could just tell that the ship was well worn and a close look at all the exposed electrical, cables, and plumbing looked like a nightmare to me. So I wondered if all the crew boarding would spend the next several months completing the work that was not finished when the boat was in Dry Dock?
The pamplet that we received when we boarded stated that in September of 2012 the Essex Began a $200 million, 18 month extended Drydock planned Maintenance , the largest Non Carrier planned maintenance in navel History including modernization in many systems. It continued to say the Essex is currently conducting work-ups in Preparation for a 2015 deployment.
From Wikipedia I found: http://en.wikipedia.org/wiki/USS_Essex_(LHD-2)

On 16 May 2012, the Essex suffered an apparent steering failure while approaching USNS Yukon for an underway replenishment. The two ships collided causing damage to both ships. There were no injuries and no loss of fuel was reported. Both ships were able to continue to San Diego under their own power.[2] On 19 June 2012 the Navy announced that the ship's commander, Captain Chuck Litchfield, had been relieved of command due to "loss of confidence in his ability to command."[13]
[dated info]The Essex is expected to participate in RIMPAC in Hawaii during June–July 2012 despite damage incurred during the collision.[13]
An investigation determined that the collision was avoidable and caused by improper supervision by Litchfield over his junior bridge crew. Although the Essex's bow had jammed, the investigation determined that better leadership by Litchfield could have prevented the collision. The investigation recommended administrative action against Essex’s executive officer, officer-of-the-deck, conning officer and helm safety officer.[14]
Commanding Officer CAPT Peter M. Mantz has his hands full to turn this ship around.