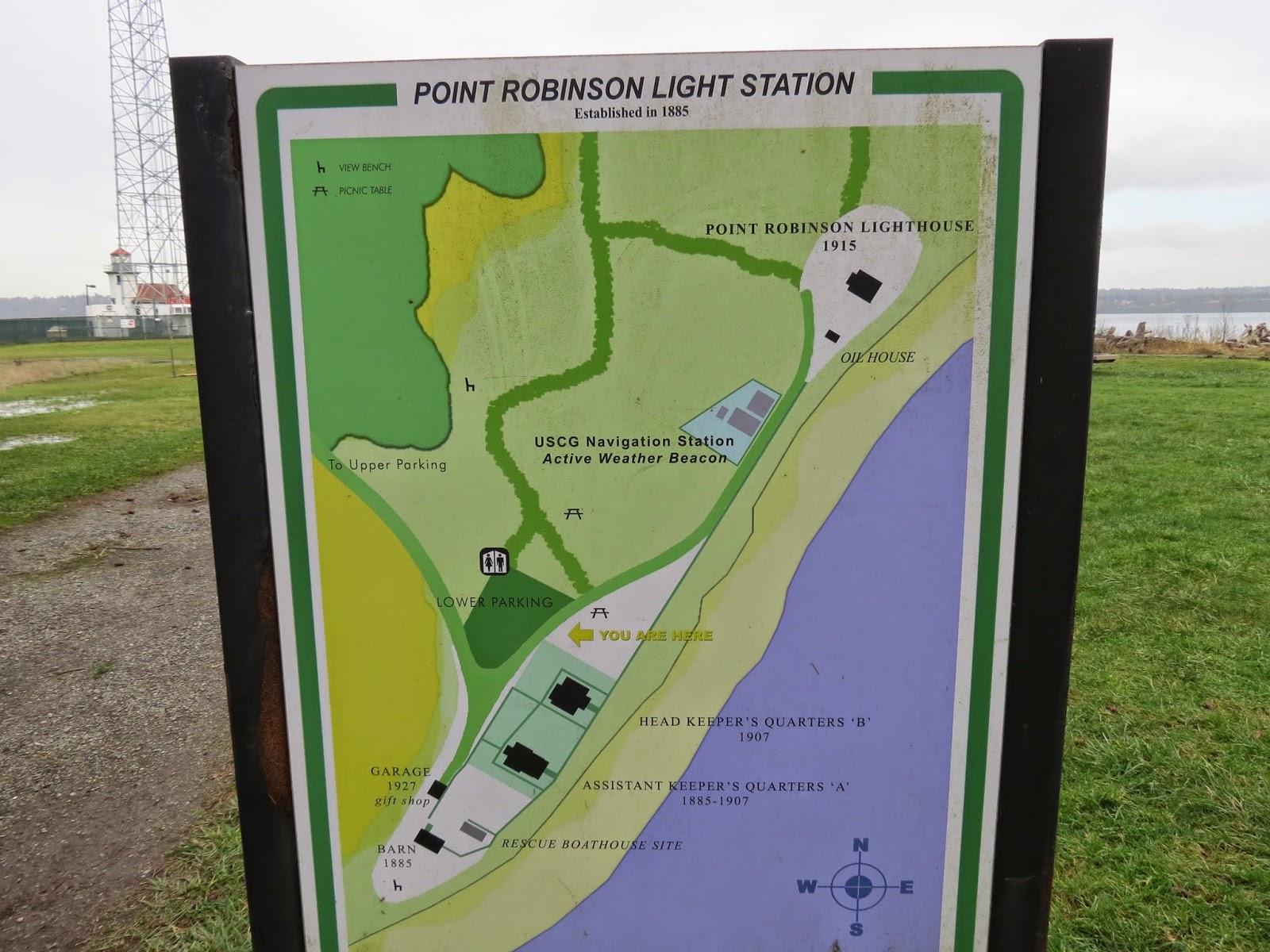 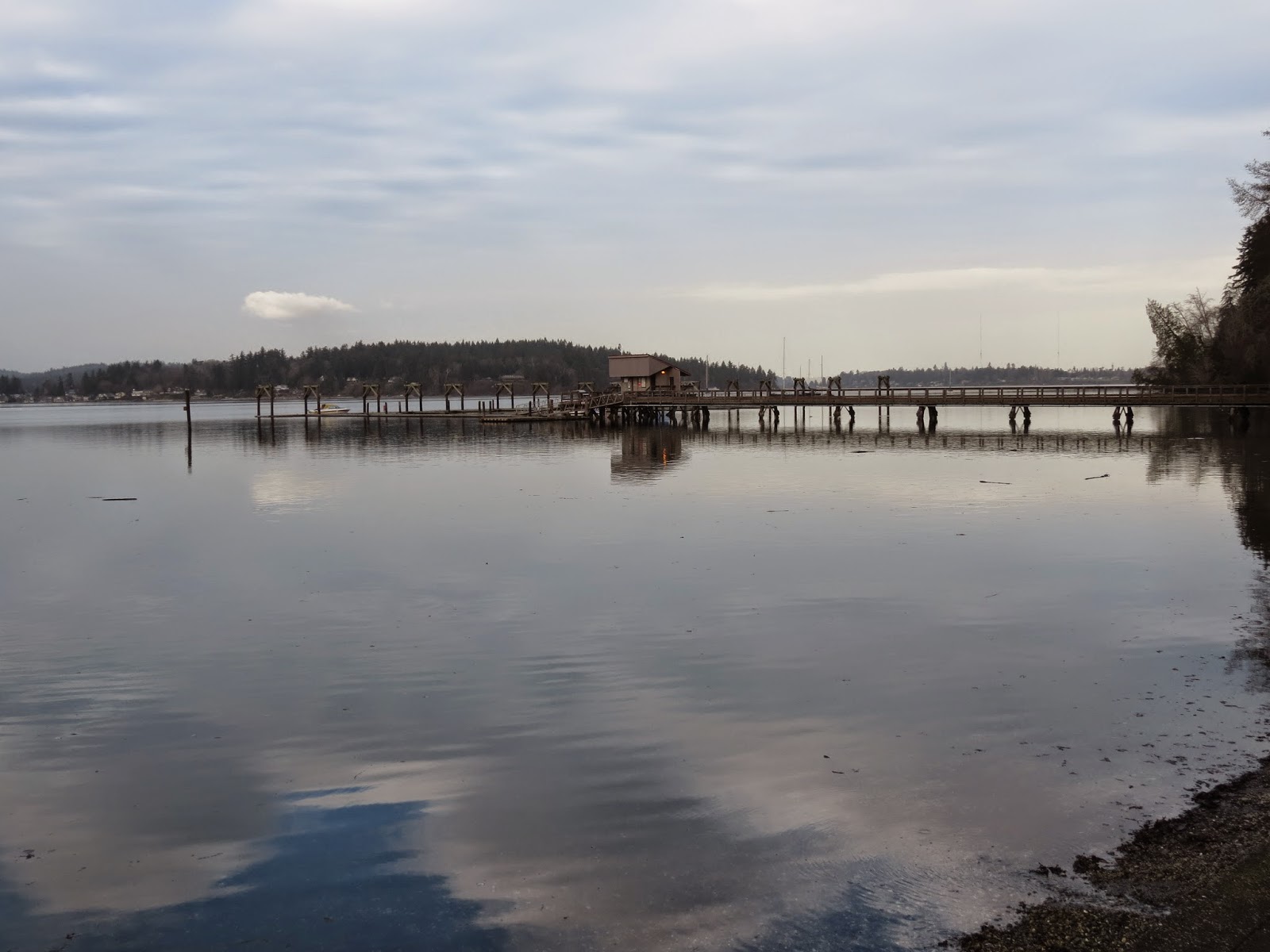 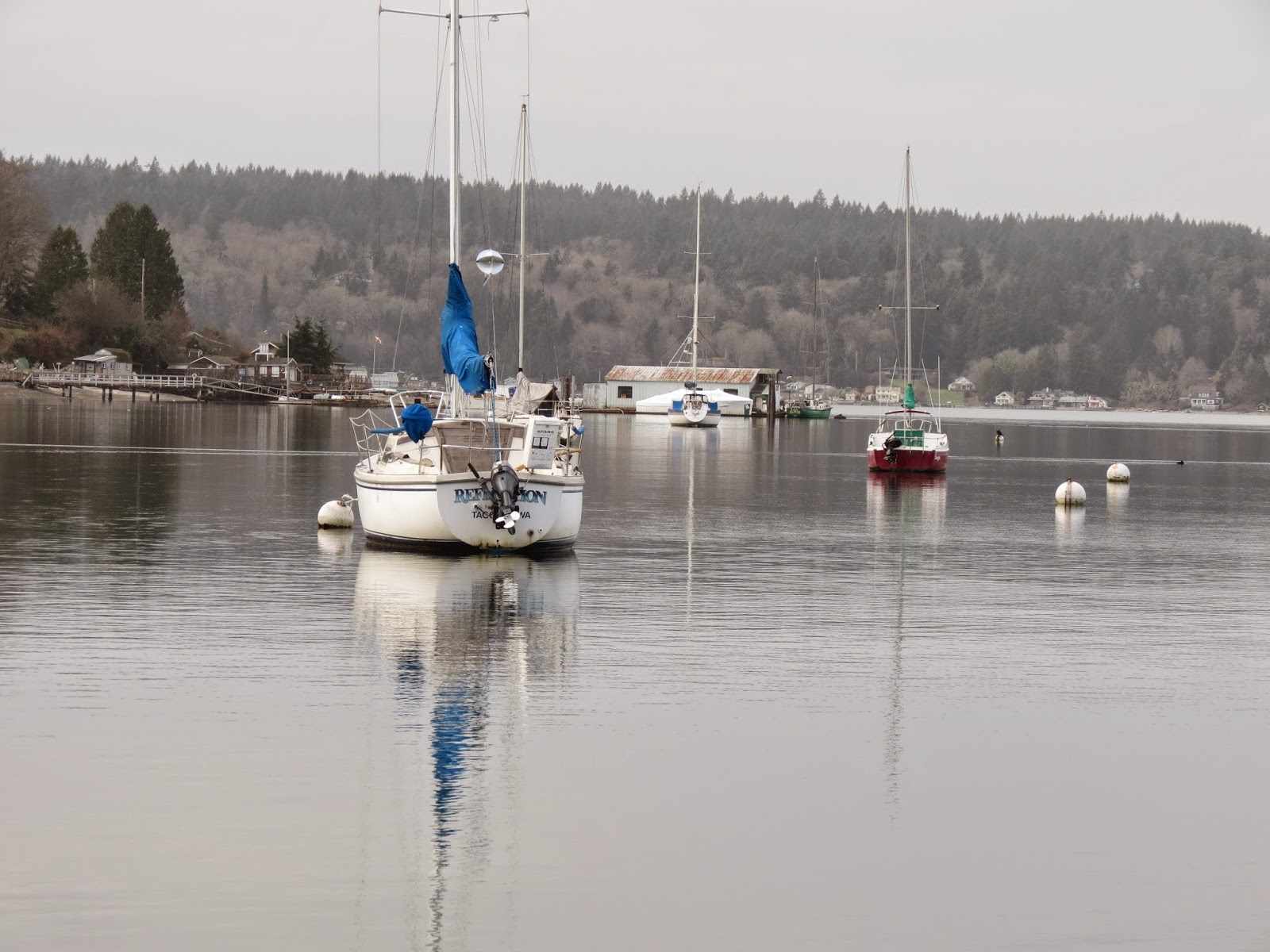 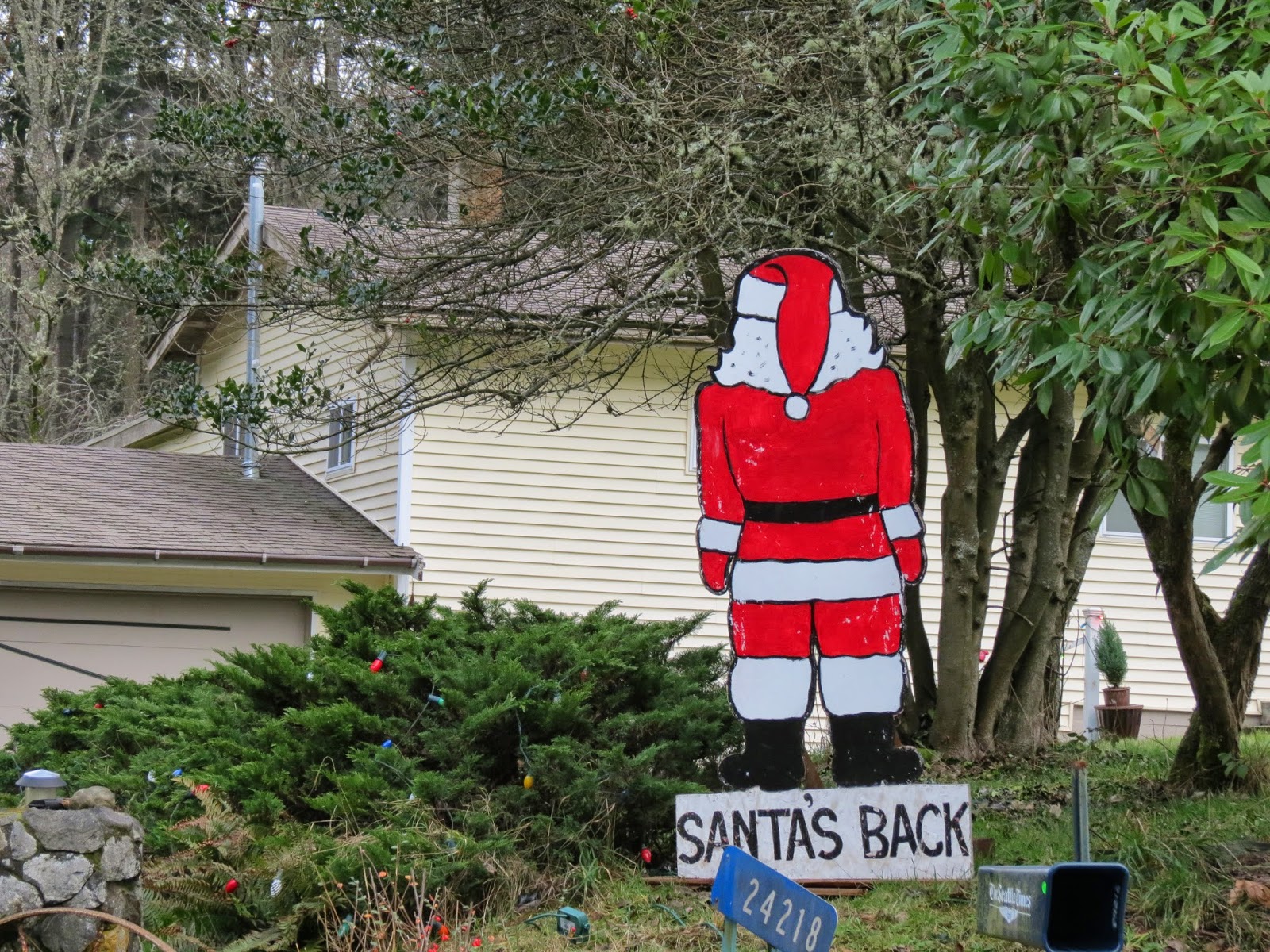 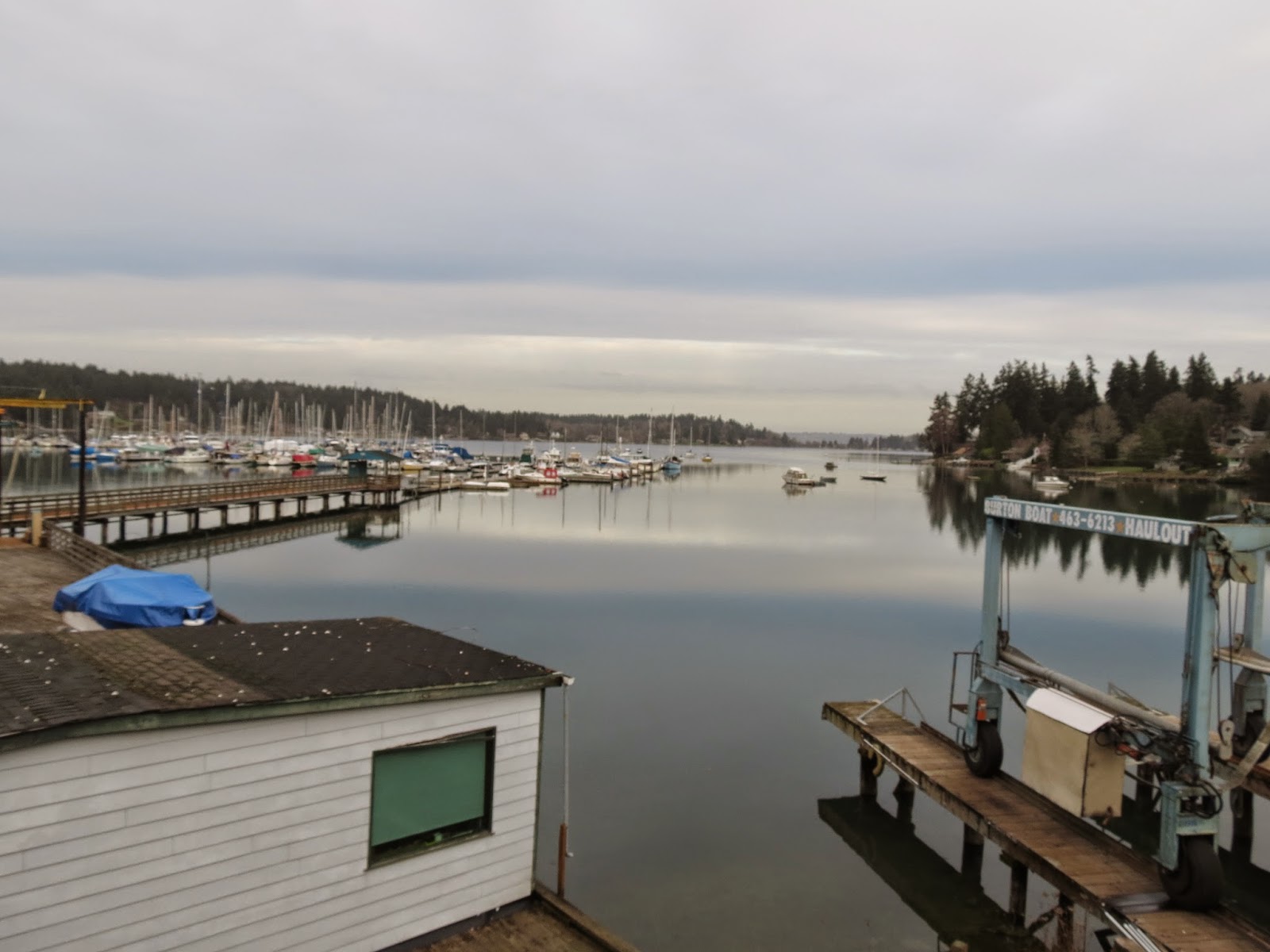 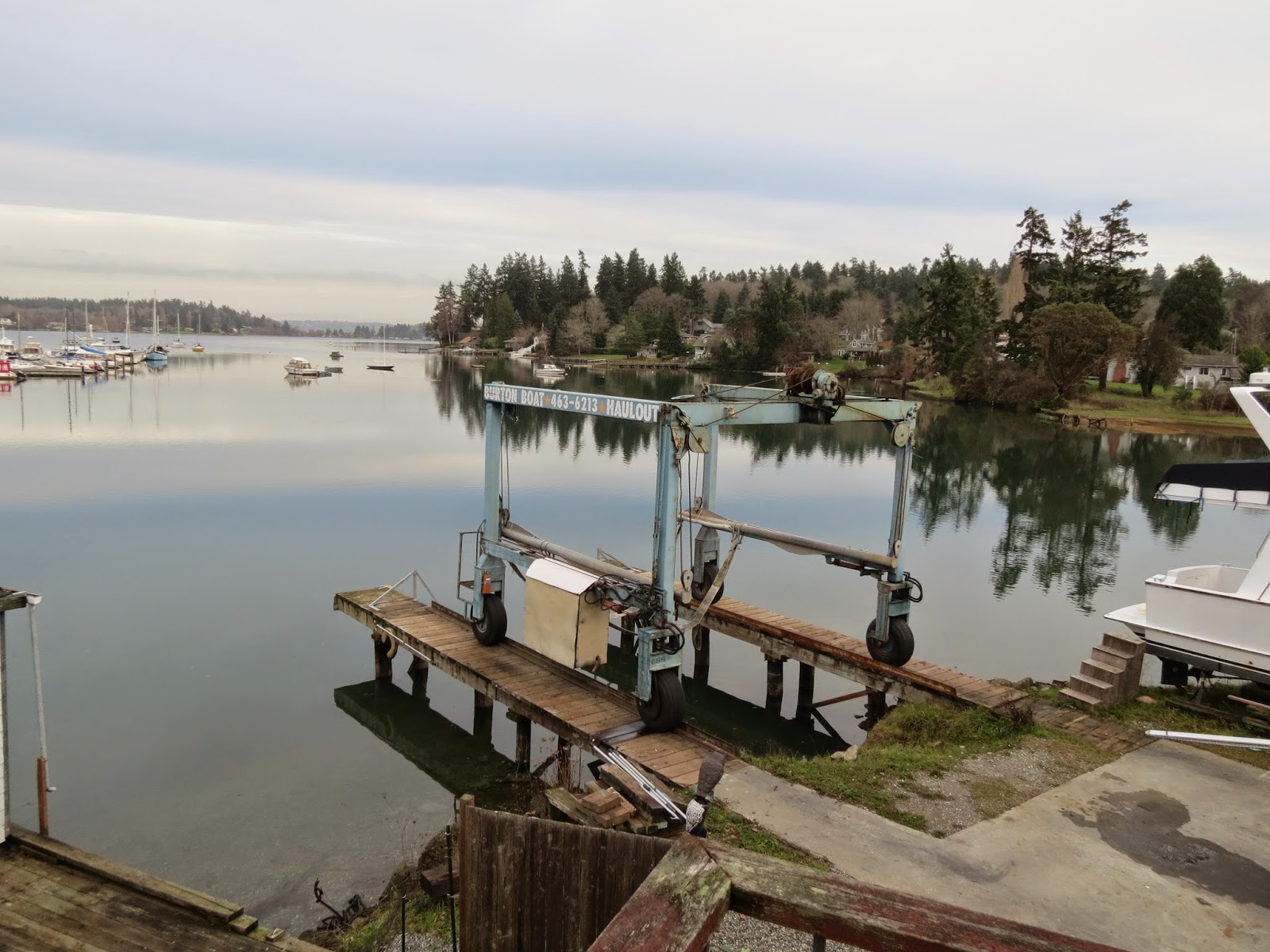 The Christmas Holidays provided lots of time for us to check a few more things of the Day Tripper list. We helped Drew's family get off to the Airport for their California Family Christmas then we headed to West Seattle's Fauntleroy Ferry Landing to go to Vashon Island. It is just a short 20 minute ride over but for the first time since we have been riding the Washington's Ferrys, we had to wait for a departing Ferry to leave the slip before we could dock.
Vashon Island is a much different community from any of the others we have experienced this close to Seattle. The Seattle locals have described the Vashon community as Hippies, or those choosing alternative lifestyles.. One other notable description describes the communities alternatives such as their disbelief in vaccinations thus a higher rate of 1050's types of virus such as whooping caugh, Pertussis and measles. "Washington has been hit with 27 cases of measles so far in 2014, up from five last year, and more than were reported in the state during the past five years combined, said Kelly Stowe, spokeswoman for the Washington State Department of Health. She said the state saw an epidemic of pertussis, or whooping cough, in 2012 that also coincided with a decline in the number of vaccinations being given out for that illness." Many of the residents are highly dependent on the daily Ferry service to Seattle/Tacoma to commute to work. The increasing population of Vashon is putting pressure on the limited Ferry service to and from Seattle/Tacoma. When a Vashon Ferry is taken out of service due to crew shortage or breakdown you hear the Vashon  natives loud complaints on the evening news. Others seem to just accept it as a matter of living on a Island with no bridges to the mainland.
We stopped at a Realtors office just after departing the Ferry that had a sign for free Vashon Maps, they were very nice and gave a few local tips and directions to the Bicycle in the Tree. No reason to drive fast, slow down to Island speed and soak in the lifestyle. All the areas we traveled on the island seemed very rural and lots of small family farms.
Then we drove to the Point Robinson Park and Lighthouse. On the way we passed a Elementary School and I wondered how many teachers get vaccinated or get the Measels? The Beaches at Point Robinson are awesome, The are two Keepers Quarters homes here that can be rented and looked like it would be a great place to spend a week. see: http://vashonparks.org/pt-robinson-keepers-quarters doesn't matter where you are in Puget Sound your going to have a fantastic view of the Olympics or the Cascades or both so almost every spot on this island seems like an ideal place to live.
Next we drove to Dockton to see the local public Moorage located on in Quarter Master Harbor, a well known Puget Sound protected harbor with it's own history including shipbuilding and other industry back in the day. Not very much activity while we were there, just a Kingfisher fishing, and a few flocks of ducks. Looked like one guy was doing some practice docking in his new power boat but I am sure that in the summer this Harbor is bustling with visitors and all sorts of activity.
Next we drove to Burton and parked at the Post Office next to the Quarter Master Marina. We decided to take a stroll through town but there was not much going on today but I sensed that their must be something unique about this community but you would have to come here and stay a while to figure that out. just no opportunity to mix with the locals on a day trip. Our last stop was at KVI Beach, warning there is no parking here so you just have to figure it out. This is obviously  a popular spot for the locals and their dogs. Saw lots of old campfires around so the driftwood goes to good use here to keep the natives warm on the cold beach days. The tide was rising and it was very evident by the flow rushing into the Lagoon from the Sound.
Vashon has a lot more to offer but it will have to wait for another visit, I am sure a week here would be fun and a month even better.
Posted by SNOWBALL at 7:01 PM No comments: 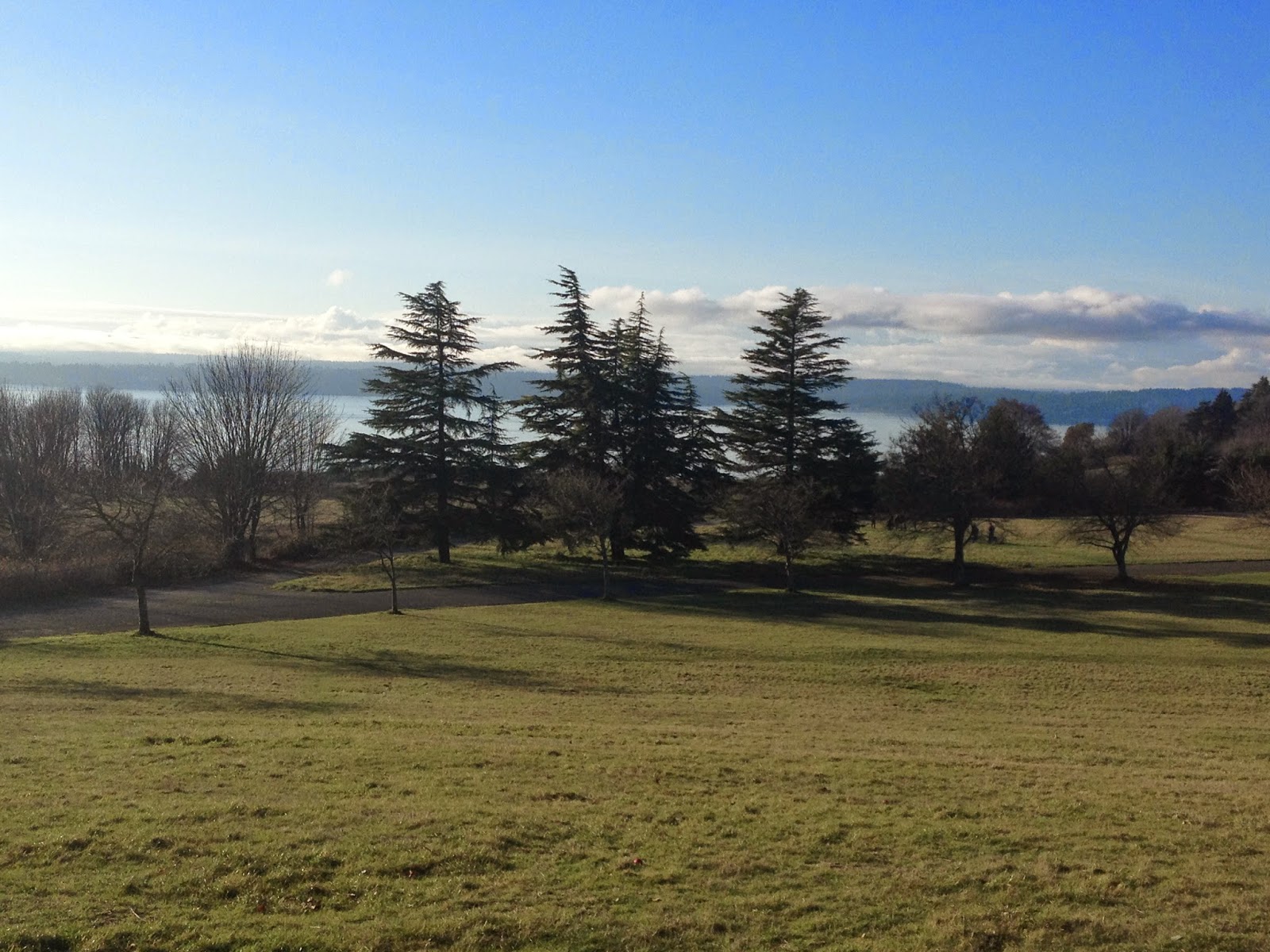 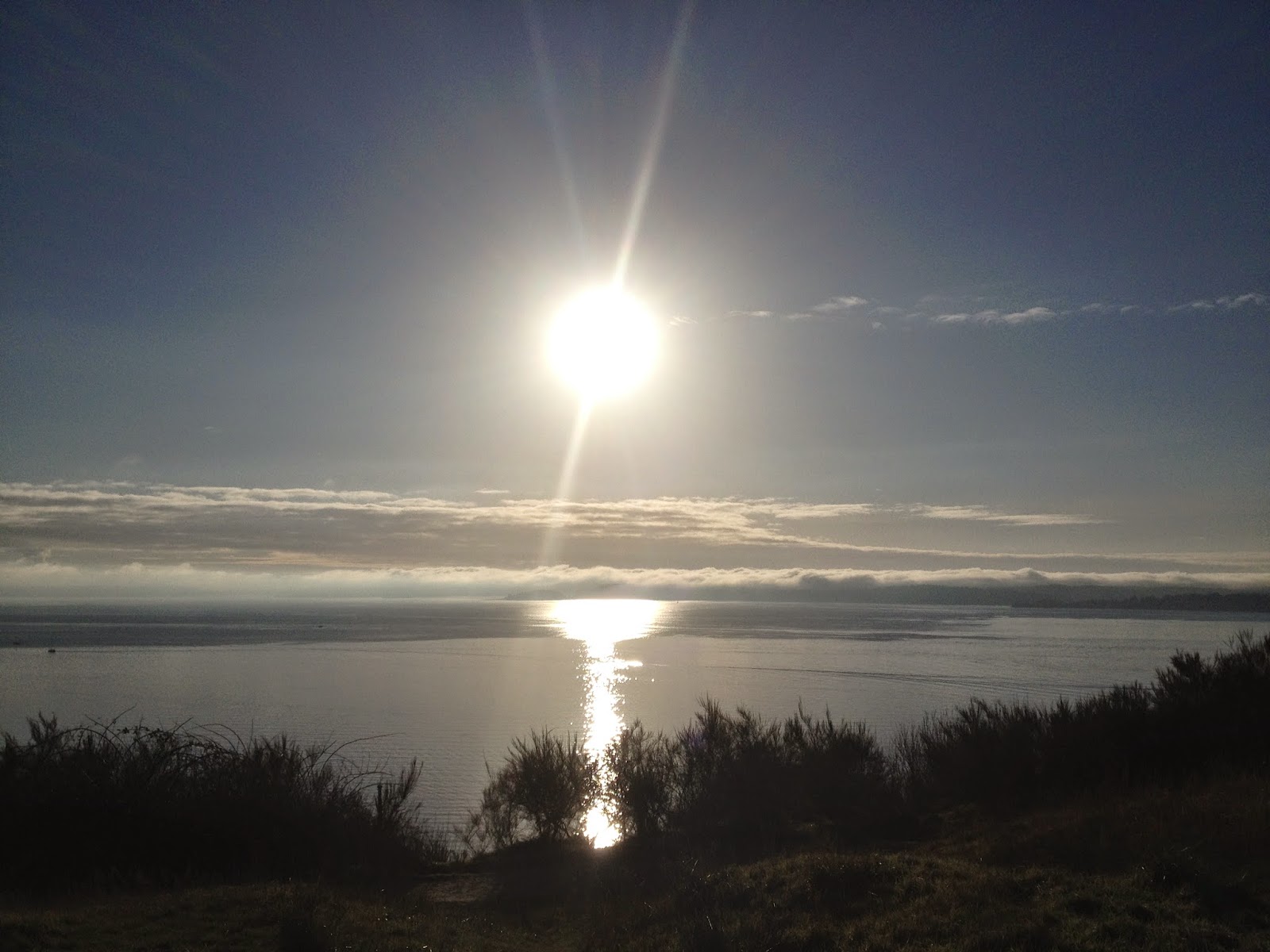 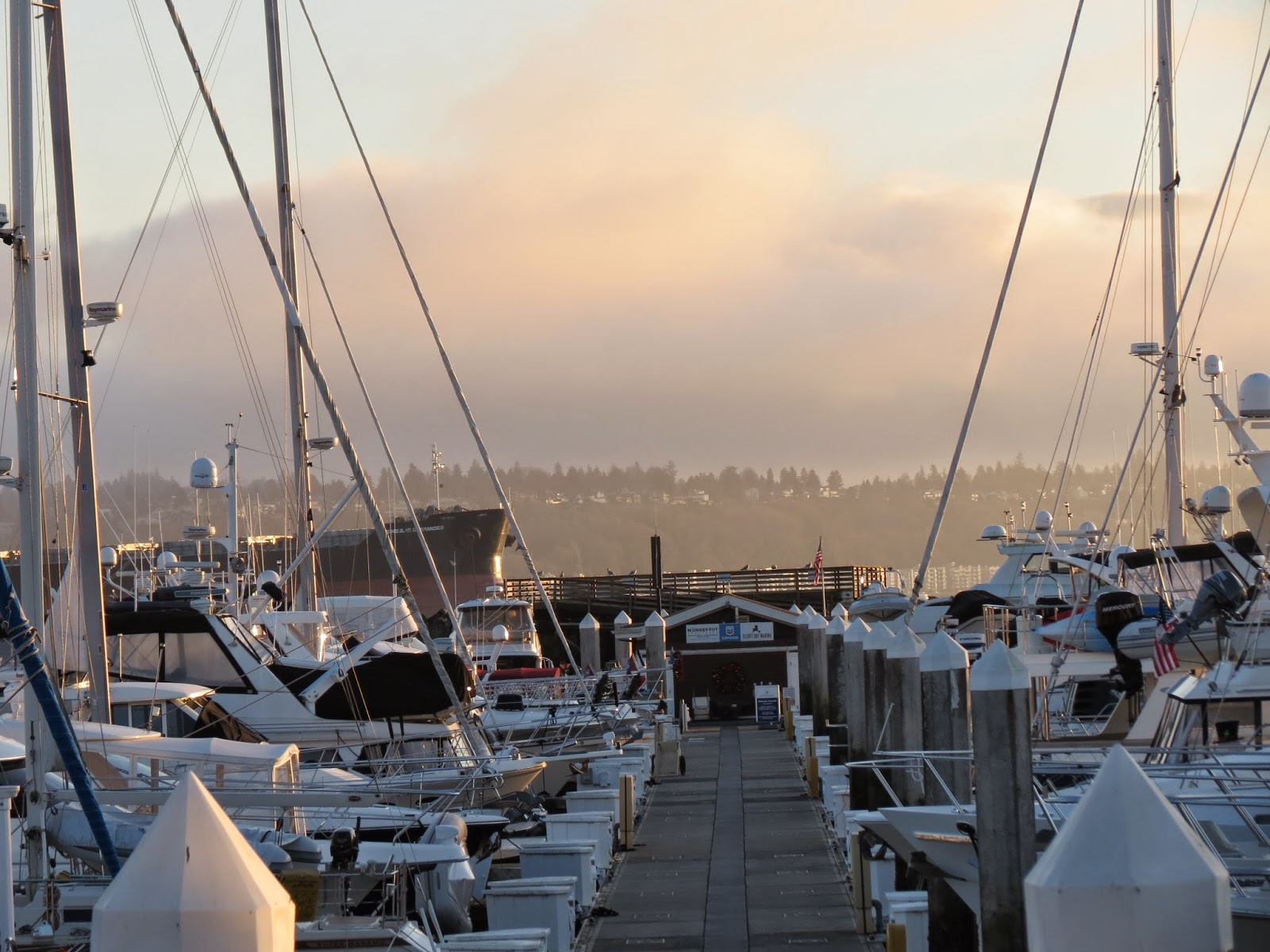 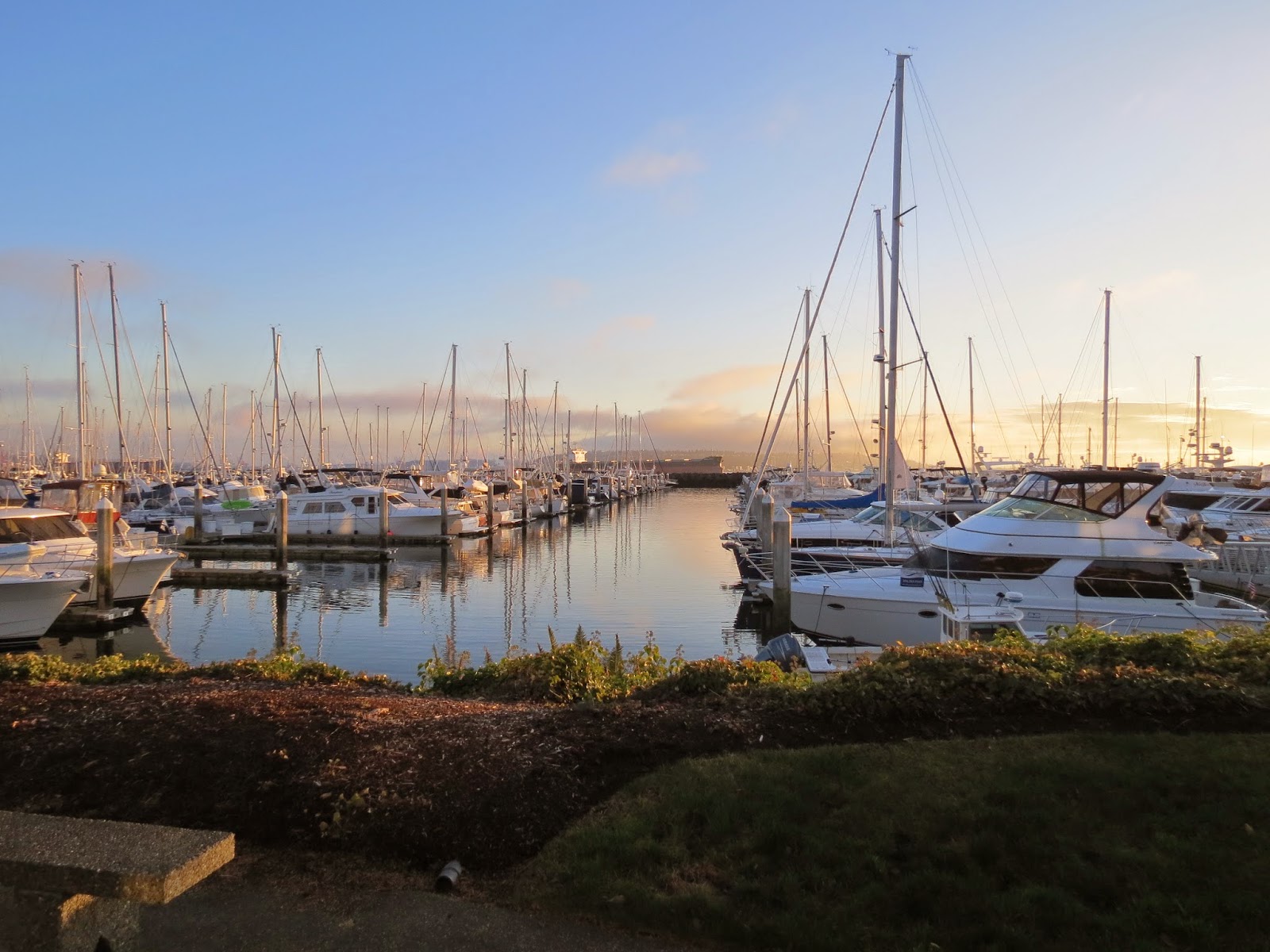 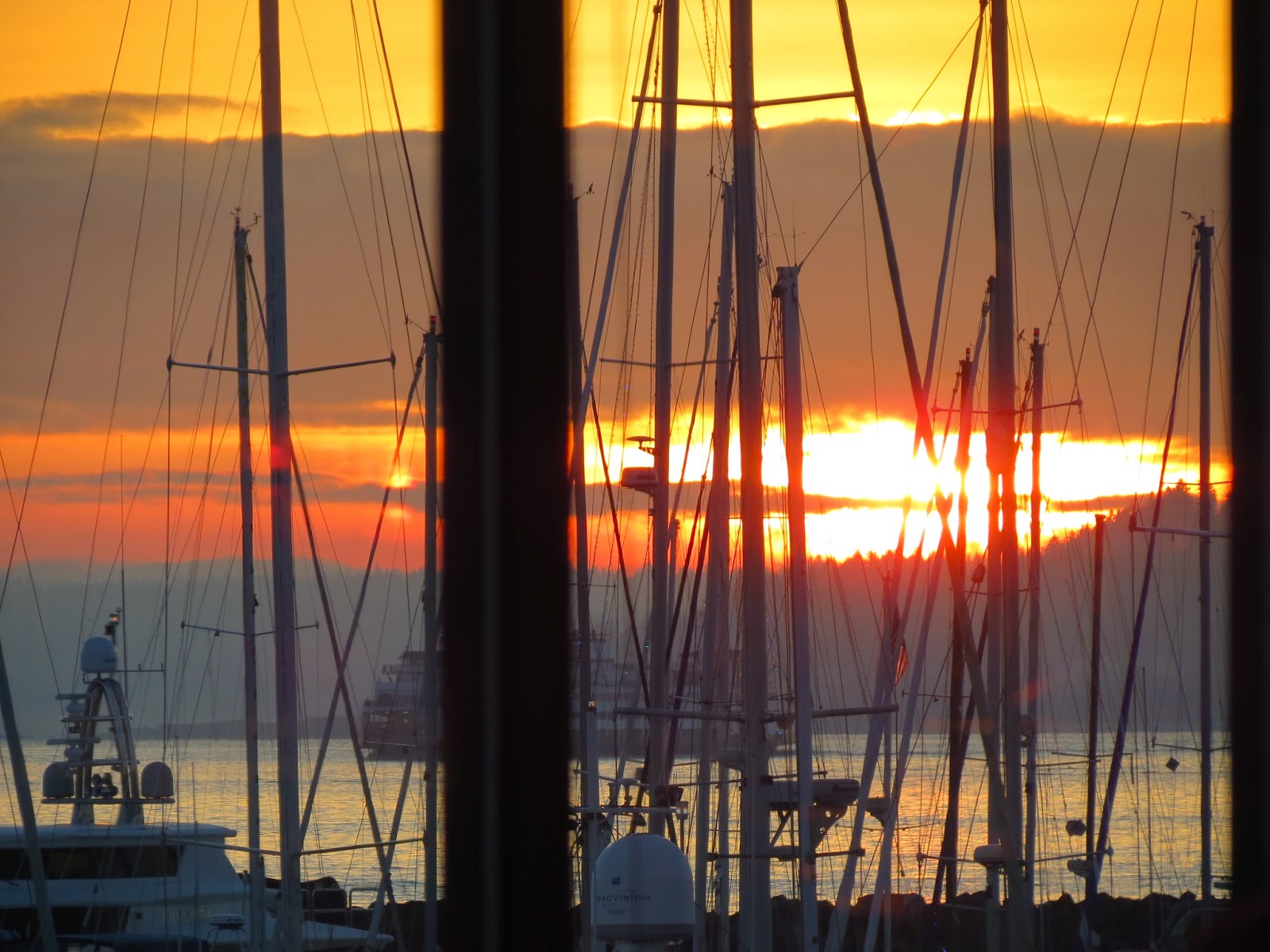 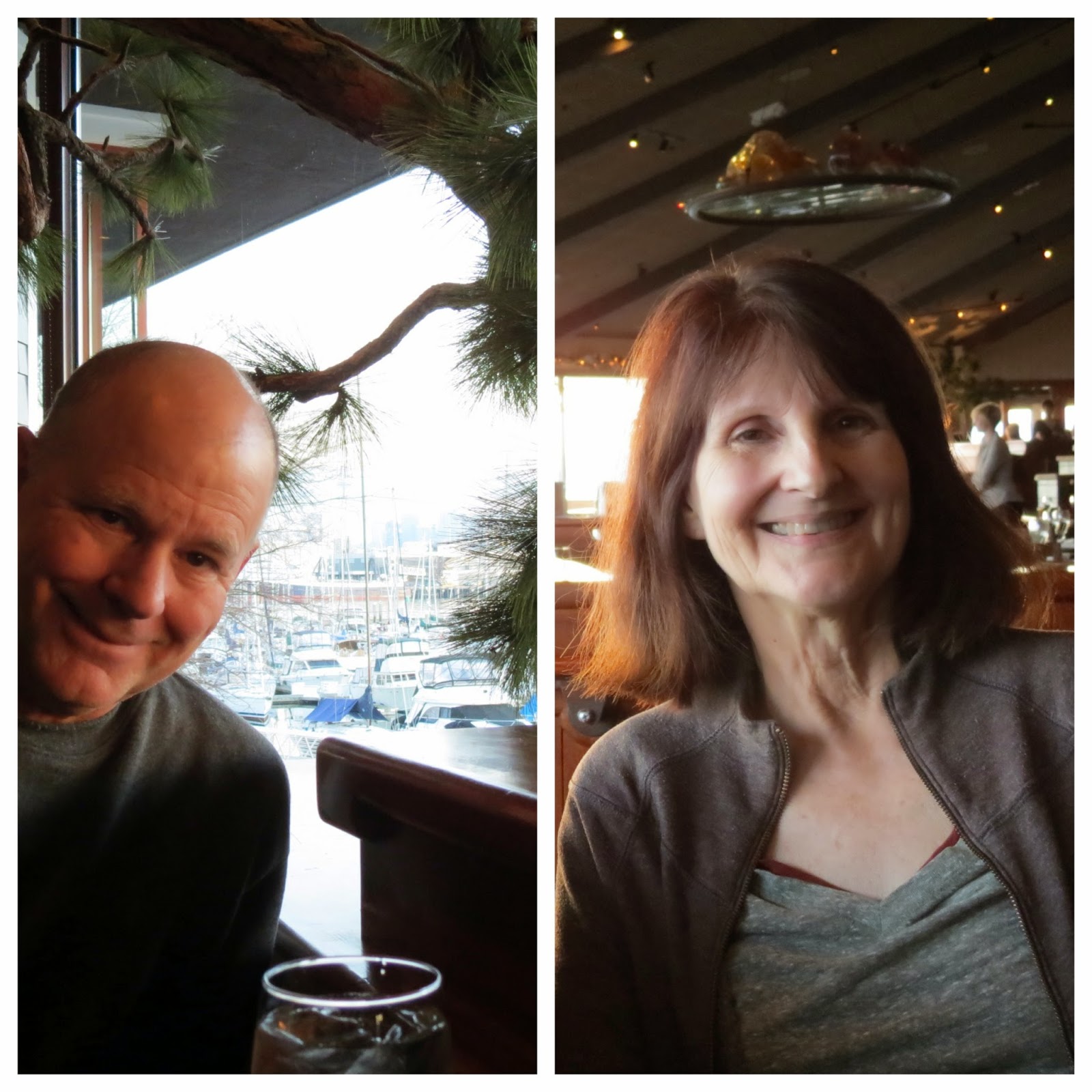 We had a very Sunny Saturday December Day to spend and thought we needed to make good use of a "Sun Day" and decided to spend it outside at Discovery Park. Then we planned to make use of a gift card our daughters family gave us to one of Seattle's better restaurants, Palisades on the way home. December was starting out unusually warm but we felt we might be in for a much more traditional Seattle winter since this December was much wetter than last years when almost no rain fell. Atmospheric Rivers other wise known as "Pineapple Express" bringing tropical moisture all the way from Hawaii to the Pacific NW ruled the December weather patterns. This kept highs in the 50'-60's even though it is wetter.
We had been to Discovery Park once on a visit to Seattle years ago. Russell, our son in law,  hobby is hiking. He Hikes the regions Mountain trails whenever he gets a chance. Russell led our first visit to Discovery Park, and we parked on one of the roads leading into the park and immediately he found a primitive trail leading down a considerable hillside to the North Beach where the West Point Light House is. It was a wonderful day and we were having a great time exploring the park but what goes down must hike back up.  Even though the Admiral and I was in  pretty good physical shape you always use a different set of muscles for new types of physical activities. We were Texas Flat Landers compared to the terrain in Western Washington where you are either always going up or down a hill or mountain side. Any flat land around here is man made. We worked hard to keep up with our 30 something kids pace and hiked right back up that hill with the primitive trail.

We parked right next to the parks education center and saw there was a less primitive trail called the Loop that was 2.5 miles long so we thought that should be just right for us. You still are hiking up and down lots of grades but the trail is sometimes paved and always wide enough for 4 persons to pass by at the same time. We followed the signs and found our way through the woods and eventually to Ft. Lawson where there are huge wide open spaces. There were several buildings there but we saved that for another day and headed toward the water as the trail continued around. I wanted to visit the light house again since I often sail near West Point on the Capri 22's at Windshare.
We walked down for a considerable time and we came across a small paved road that led down to the Beach and Light house but again we had a hike back up and we wanted to be sure to make our Dinner date before sunset. So we skipped the trail to the light house saving that for another day and the rest of the trail back to out car was through the wooded areas of the park.
I am only now learning about the interesting History of Fort Lawson. If you are interested in such it has a somewhat colorful history see http://en.wikipedia.org/wiki/Fort_Lawton
We finished the evening at Palisades, a gift from our Daughter and Son in Law. More than one knowledgeable local has recommended this resturant as The place for seafood in Seattle. It comes complete with boats and Awesome Sunsets.
Posted by SNOWBALL at 8:32 PM 2 comments: