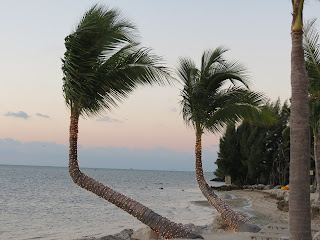 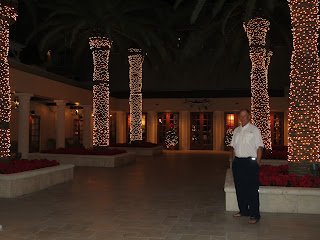 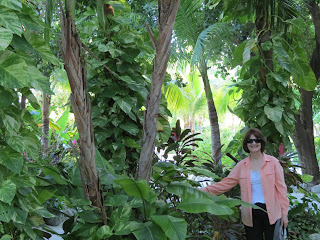 Our Daughter presents us with a great 42nd Anniversary gift with a stay at Cheeka Lodge in Islamadora. She is a member of Jetsetter.com http://www.jetsetter.com that has deals on 5 star resorts and such. She wanted to give us two nights but leaving a boat on a Mooring Ball for three days without attention makes this Captain nervous. The Admiral has been reminiscing with her parents about their trip through the Keys back in the 50's, so having a second opportunity to visit Islamadora gave us time to see one of the spots they remembered as well. We had a marvelous Anniversary and the pics tell the story better than I. It was not quiet full season here yet so we had a lot of the place to ourselves at times. We will remember always our 42nd because of this very special place.
We heard that the Bass Pro Shop in Islamadora had a the sister ship to Hemingway's "pilar in their store. We walked about 1/2 mile from the Lodge and really enjoyed this store located with a beautiful view of Florida Bay and a quaint little marina. The sister ship is right in the middle of this huge store and you can actually go up some steps and board the vessel. Pretty Cool. the Zane Gray Lounge is also located upstairs in the store and we had a great Ahi Tuna Snack with an awesome view. We then walked about another 1/2 mile to the Green Turtle Inn where Lynn had eaten with her parents back in the Day. The waitress was very nice and gave us a recent history of the Inn. Some Florida Billionaire restaurant dude bought it 5 years ago and remodeled it. A lot of the old memorabilia was hanging on the walls or maintained as part of the remodel. Had to get their Crab Salad that some other locals told us about. Each of the Key Communities have distinctive Aura's. Islamadora and the Cheeka Lodge go together.
Posted by SNOWBALL at 1:50 PM No comments: 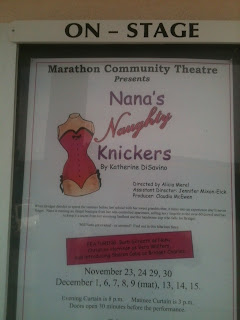 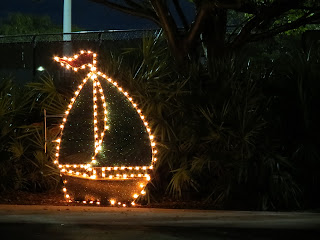 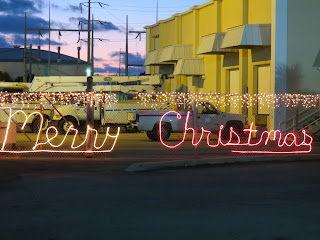 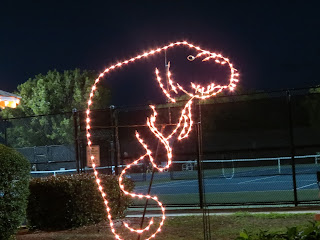 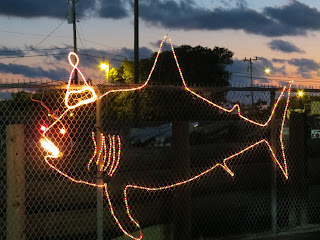 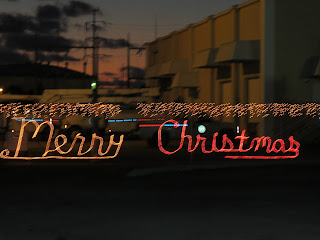 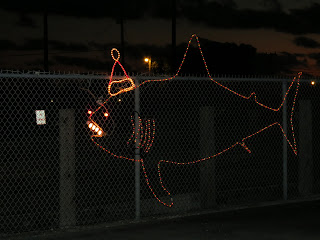 ﻿
The Marathon Arts
We heard over the Cruisers Net about the local Community Theatre and decided to buy tickets to Nana's Naughty Nickers, a play about a retired widow in NYC who decided to design and sell Lingerie from her new York apartment so she would have something fun  to do. While it is illegal to have a business out of your apartment in NYC it created a funny drama as she serves her clients and tries to avoid the Superintendent. We also bought tickets to the Annual Holiday Concert. It is wise to arrive about an hour early for the Social Hour as Jackie plays old hits on her electric piano and keeps the upbeat. We met several other cruisers during the social hour and heard lots of great cruising stories. The Holiday Concert was better than expected and very Hooty as well. Florida is retirement central for everywhere USA, Canada, and several European countries as well. The retirees bring with them their money, talents, and arts to Florida. If there is not a place for them to practice there passion they create a place. This was very evident in the Annual Holiday Concert complete with singing, dancing, Tap Dancing, Belly Dancing (no skin was exposed) and Choral arrangements. Many of these artist are here just in the winter months as they abandoned the Northern climates in mass either by boat, RV, and all others means.
John my First Mate on the trip down to Marathon was headed this way to pick up some boat parts so he visited with us a couple of nights. This gave us a chance to get some more local knowledge from him. We had dinner one night at Porky's http://porkysbaysidebbq.com/ that is a famous old restaurant on the Bay side and one night at the Sunset Grille on the Atlantic side right at the 7- mile bridge. Just as we arrived ar the Sunset Grille I noticed the sun was about to set and ran over to get a few pics, there were 20-30 people lined up along the perimeter of the restaurant at the waters edge to get the perfect shot and just as the sun touched the Horizon this Sport fisherman with the guy driving from the Tuna tower speeds out and does this little circle yelling YAAHOOOO and stops the boat right between the Photographers and the Sun. some were not amused but I could not hel[p but laugh, it was funny, I know that guy ended up in lots of shots and videos, he is probably on You Tube for sure.
The Dingy dock area is very active with all sorts of sea life. The Manatee's are around on a regular basis. We are learning what is OK and what is a Felony when it comes to being in the presence of these water elephants. You can touch but with just one hand, two hands is not allowed, you are not to give them fresh water, but the Marina guy did so we watched the baby Manatee drinking from the hose. Queen Angel fish, colorful parrot fish, baby Barracuda that live in the Mangroves till old enough to go to sea, strange looking fuzzy crabs, shell fish, and we have heard of Seahorse and a big green eel being sighted.
Posted by SNOWBALL at 7:28 AM No comments: 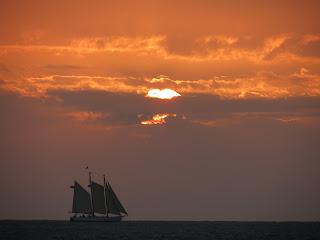 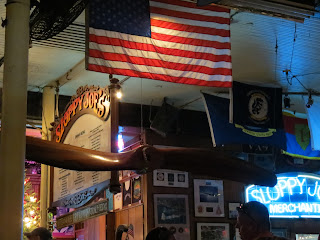 ﻿
﻿ We passed by the Hemingway house on our first visit to Key West. We have been in so many museums on this cruise that I was not much interested, but the Admiral heard from other cruisers that it was really worth doing. I was glad she talked me into it as it just took a few minutes of the tour to realize how mush Earnest influenced American Life and indeed my own. He moved to Cuba around 1940 and lived there for 20 years after leaving Key West where he lived for about 12 years. He was in Cuba when my parents spent about 3 months there partying and recruiting baseball players for the Abilene White Sox Minor League Baseball team. Besides the movies based on his novels that I watched in the 50's with my mom, his books were around our home in Abilene. I was of course very young and never really thought of Hemmingway except for the movies, never read his books. He certainly had a huge impact on Key West however. I was really impressed with the stories about his beloved sport fisherman/Cruiser "Pilar" that is reportedly in Cuba at his home there roting. The Hemingway Home is a must do in Key West. http://www.ernesthemingwaycollection.com/ We spent several hours here before venturing outside the compound to seek the Southernmost Point in the US. The Admiral wanted to do this next time but you never know if you will make it to Next time so we made the Hike and for me it was worth it. We than hiked back down Duval Street to Mallory Square. It is best to get to Mallory Square a couple of hours before Sunset as there are lots of street actors there to entertain you. But after seeing a few of these acts we settled on the sea wall to wait and watch the Sun as the earth spun it to the Horizon. Unfortunately for us there were several cloud banks so no chance to see the Best Sunset ever or the Green Flash: http://en.wikipedia.org/wiki/Green_flash Maybe Next Time!
Hunger called so we returned the short distance to Heminways hang out, Sloopy Joes. Worth doing once but if there is a next time we will instead take up some locals recommendations. the band played Shel Silverstein's " Your Still Gonna Die" http://www.songmeanings.net/songs/view/3530822107858580749/ It certainly fit the Key West ideaology. We hope to come back to Key West at least one more time as we both have some things we would like to do here before we exit the Keys. We wish all a wonderful Holidays and a perfect New Years!, We all survived the end of the Mayan Calendar! I was talking to our friend Johny up in Tampa yesterday and I was telling him that we may stay here through Janurary, He said " Enjoy it while you can Where your At!" I loved it.
Posted by SNOWBALL at 7:44 AM No comments: