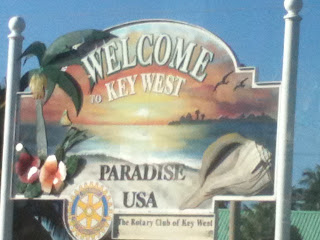 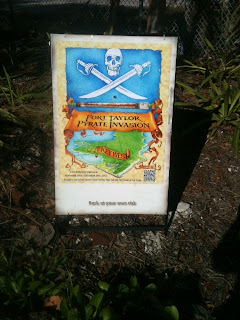 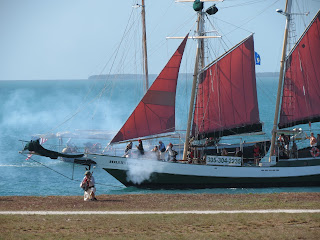 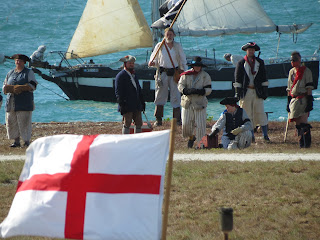 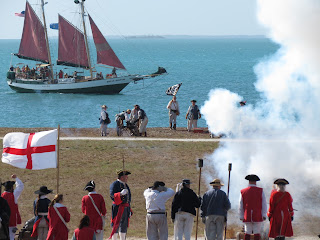 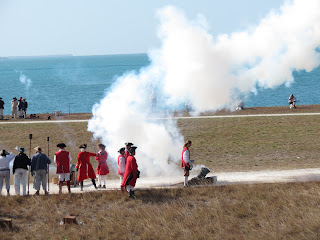 Fort Taylor Pirate Invasion
The Admiral immediately began to research for things to do in the Keys on her Ipad after getting squared away onboard. She met a cruising couple from Chicago at Hurricanes the night before who told her they planned on taking the Lower Keys Shuttle to see the Pirate Invasion at Fort Taylor in Key West. She had the Shuttle schedule and by 0730 Sat. morning we boarded the bus with a few cruisers and several locals for the 1.5 hr 50 mile ride only $1.50 a person for seniors! We met Bobby the Viking Spirit while waiting on the bus and knew he lived on the boat that was anchored next to us. Bobby sailed into Marathon 10 years ago and never left. This trip to Key West would be only his third time. He said “there is not much in Key West for him”, he likes quieter Marathon. I think Bobby has a regular job in Marathon but he also cleans boat bottoms for the cruisers coming through, so if you sail into Boot Key Harbor and need your boat bottom cleaned just look for his Viking Karve. Bobby told me a story about sailing out in the Atlantic and the winds were 30 knots, they were running with the wind and surfing down big waves. He was having the time of his life and told his crew he wished it was blowin 40, his crew could not believe he would want more wind and he told them “The Closer you are to Death, the Better Life Becomes”.

There were also a couple of young Russian Guys on the Bus, one had a guitar, they said they traveled down from Miami and had made this trip before. They planned on sneaking onto a private beach in Key West and sleeping on the beach where they could enjoy the free coconuts and the Sausage they had brought with them. They would just sleep on the beach they said. After some questioning though I determined they were really Russian spies and I felt like calling an old friend out in LA who is a writer in the movie business. I felt we could make a documentary about these two guys and name it “From Russia with Love – For Reals”

We made our way to Fort Taylor, just a short walk from the last bus stop. We encountered a authentic re-enactment of a time long long ago when the British held the Fort Taylor and Piracy was epidemic. We ran into Denise and Beuford from Chicago who cruised to Marathon on their Catalina 380 and spent the day with them,  the Red Coats, and the Pirates. We saw Piracy Trials, ate authentic Fort Taylor Pirate food, enjoyed Pirate and Buccaneer music, learned how to craft weapons, tools, and various other things. The Battle between the Red Coats and the Pirates capped the day off, the citizens of Fort Taylor were thrilled to be gone of the Red Coates as they had made their lives miserable. On this day the Pirates were hailed as Hero’s.!

We have talked to several cruisers who have been here before us and or read their blogs, some really loved their visit here and others were not to thrilled with the Florida Keys. We are in the camp that is grooving on the life here. Those that complain mention a lack of culture, lost souls, and inhabitants that seemed to have dropped out of the mainstream. I did some light research to figure out this different culture here in the Key’s and  here is a nutshell of my short research:

“In 1815, Spain awarded Key West or Cayo Hueso, as it was known then, to Juan Pablo Salas. Salas later sold the island to John Simonton, an American businessman for $2,000.00. Simonton, a true capitalist, convinced the US military that Key West would make a great naval base. Hence, in 1822, Lieutenant Perry of the US Navy sailed into Key West, proclaimed the island as a US territory, hung up a flag, fired off a salute and went home to Washington.

Key West was already a wild town in the 1800s, complete with Pirates, whorehouses, and ship wrecks whose bounty was shared with the islanders. Then in the 1920s the Prohibition jump-started Key West’s economy and reputation.

Bootleggers became overnight millionaires trafficking rum from Havana and whiskey from Nassau. Key West became well known for its oversupply of liquor and when Prohibition ended and numerous bars came out from hiding.

During that time Key West also became a hangout for artists and writers like Earnest Hemingway and Tennessee Williams, forever leaving their mark on Key West History and making for an interesting mix of folks still haunting the bars and beaches of Key West today looking for inspiration. Not surprisingly, Spring Breakers soon followed- also looking for their own brand of inspiration.”

Early on Shipwrecks either by navigation or storm fueled the Key West Economy, they became the wealthiest City in the US due to this. Rules, Courts, and all manner of business were formed around this economy. Hurricanes did not stop the most enterprising from claiming a wreck as the first one there had first rights. The descendents of this enterprising culture are still very evident. Even in recent History the Key West Police department controlled the drug trade in and out of the Keys. The Feds cleaned that up in the 70’s and as late as the 80’s. So yes you will find a colorful culture here that includes artist, persons from all over the U.S. that do not fit where they came from and even hard working Middle American’s that threw out the anchor here and raised their All American families here in the American Tropical paradise. We feel like the Keys are very special and we especially love the cruising culture here.