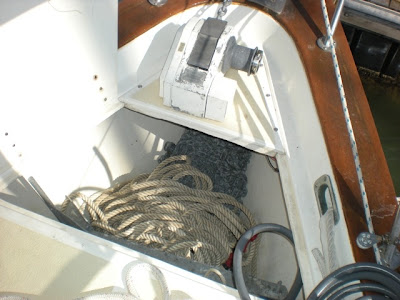 This is just one of the discoveries, Mike pointed out that the anchor locker hatch had been cut into 2 sections and the forward section was glassed in to support the windlass. I had assumed this was the way it was from the builder, he also mentioned I need to install backing plates on the hatch 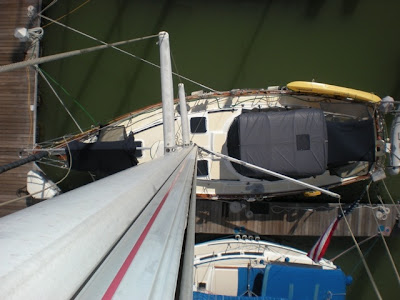 
Look at that mast, One of the th 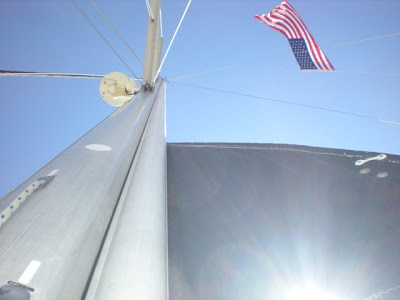 ings I take pride in is tuning the mast to perfection.

A bottom up look at the mast. Finely Tuned. 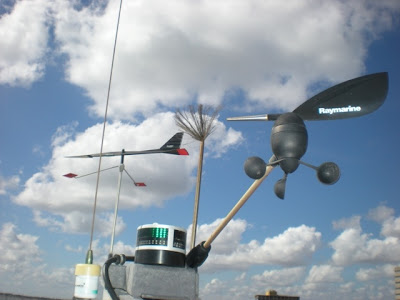 The Masthead
Mike inspected the Standing rigging from the masthead down. Here you can see the Raymarine anometer and wind direction instrument, the VHF antenna, The LED tricolor navigation light, and the visual wind index. The little wire brush you see sticking up is supposed to be a lightening ground system but it's effectiveness is questionable at best. 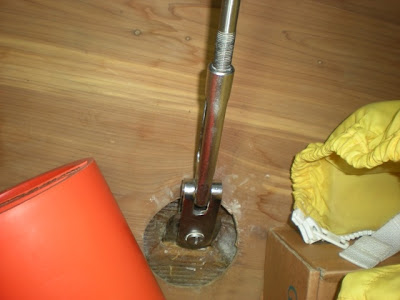 Mike inspected every chainplate from top to bottom and yanked on it to make sure all was secure. 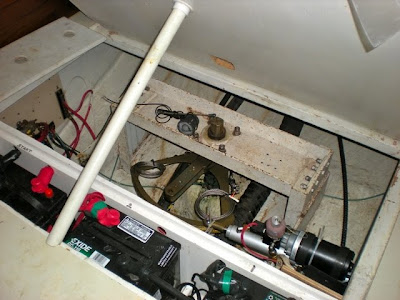 I was glad to learn that our auto pilot was connected to the rudder post independent of the quardrant. This is important in the event of a quardrant or wheel steering failure, then the auto pilot can be used as a first back up system before the need to use the emergancy tiller.


When we were having Wand'rin Star decommissioned in Port Townsend, WA. for the trip back to Texas there was this boat being hauled out in front of us. There were two thirty something females with an awesome ocean racer looking boat and the same surveyor we contracted with to survey Wand'rin Star. I saw Alain near the travel lift and hollard out to him. I told him thank you for helping us buy the boat. He acknowledged and continued with the survey of the ocean racer. I asked one of the women if they were having the boat surveyed for a pending purchase, and she said no, that they planned on taking the boat across the Pacific to Hawaii and they needed a survey for the trip for their insurance company. Also they wanted to make sure the boat was ready to make such a trip. I did not forget this as it made complete sense to me to have a qualified professional to objectively survey a vessel prior to tossing off the lines to go anywhere long distance.

We have had thousand of dollars of upgrades and maintenance in the last three years to prepare Wand'rin Star to go cruising. The Admiral & I have discussed several times the need to have an updated survey for Wand'rin Star to get the insured value closer to our investment. I knew this would be important prior to departing on our cruise. I did not expect to learn much new about our boat during the survey due to working on the boat for the last 3 years and being so involved in the maintenance and upgrades.

Since it was time to have the boat hauled for a bottom job I knew it was the right time to hire a surveyor. I called Mike Firestone, he is the most respected surveyor in the Coastal Bend. He is the guy you want if you need a complete report on the condition of your boat but he is not the guy to call if you are selling your boat!

Mike helped us immediately identify a problem with our rudder during haul out and made suggestions working with our insurance company Boat US. He spent several hours inspecting the hull throughout and assisted in directing the repairs to the rudder. The result was complete confidence in the repairs and the out of the water work completed in preparation for the cruise.

A couple of weeks passed by before he could return to complete an in the water portion of the survey. Mike showed up at 0900 hours and did not stop till 17:30 hours. I stayed by his side all the way through the survey. He pointed out several things that I could not believe I had not noticed during my many projects. His attention to detail is incredible, he pointed out things that needed attention or correcting throughout this portion of the survey. I had a 1 1/2 pages of notes of issues that needed attention. All were relatively minor in terms of cost, mostly in labor, but at the same time much easier to correct prior to departing. Mike stated that we had done a very good job of preparing this boat for a cruise and he would not hesitate to take the vessel in it's currant condition across an ocean. It is difficult to explain how I felt at that moment to have my work validated by one of the most respected professionals on the Gulf Coast. The very next day I began addressing the list I compiled during his survey while simultaneously working on the 2 page list I had compiled to complete prior to departure.

The fact is, and your read it over and over again in the cruising and sailing magazines, you can never be 100% ready to cast off the lines...there is always something that needs attention. if you are going to go then go....fix it on the way. We are already there, the remaining time waiting for hurricane season to pass will be spent getting all the remaining small stuff done, and there will always be small and not so small stuff to attend to.....Paradise is not free
Posted by SNOWBALL at 5:03 PM 1 comment: