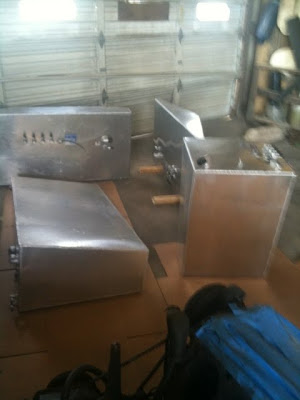 Our tanks have arrived, tomorrow I go to Gatewoods and etch them with a acid wash and then sand the surface to prepare 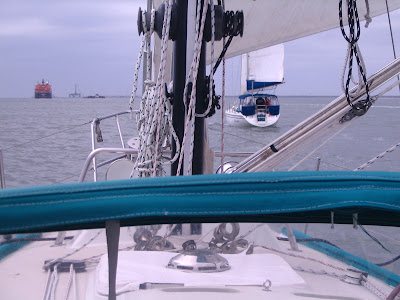 then to be sprayed with a 2 part epoxy.

I am happy to be at the helm of the Gallagers new Erickson 38, Neil is trimming the sails in light winds and we are about to pass the lead boat. The Erickison is fast! 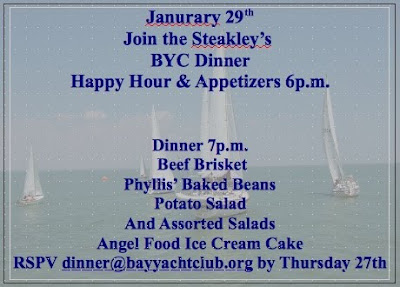 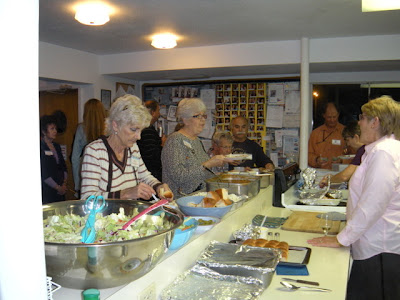 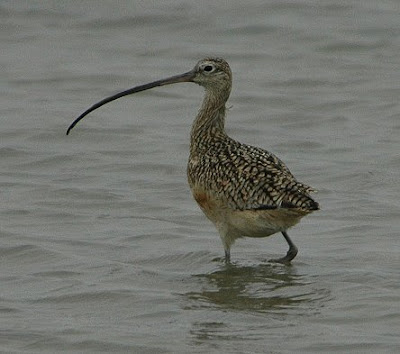 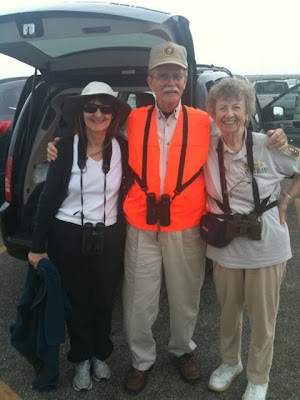 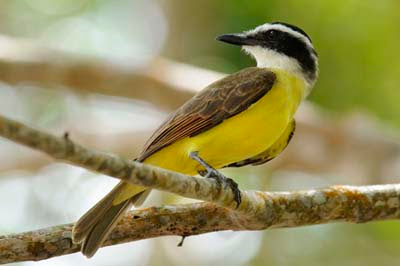 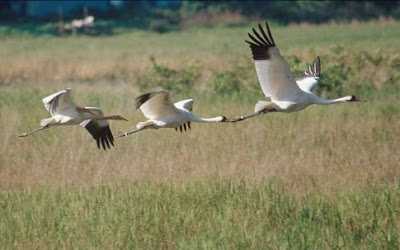 This Family of three live this time of year near the Goose Island Sate Park. 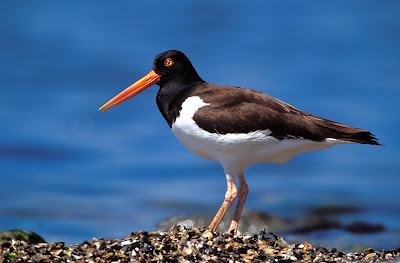 The Oyster Catcher looks much cooler up close!

all of our tanks have arrived at Gatewoods. I went & took a few pics today of them and they told me I could save some money by doing the acid etching and spraying on the two part resin myself. So I will show up tomorrow morning and go to work. We might be able to take the boat over Monday to have them installed. The following are the things we have been doing to stay out of jail while waiting for the tanks:
Saturday Jan. 22 Port A Cruise
While we could have motored over to join the cruise we just feel it better not to take Wand'rin Star out when so many things are not installed properly. So since we were still staying in the Port A condo we joined our friends from BYC at the Port A marina and enjoyed the incredible sunny January day just hanging out, going to J's for dinner and back aboard Chris & Cathy's Morgan 41 for the evening conversation. We got a great invitation to sail back to Port A with Neil and Teresa Gallager aboard their new baby a Erickson 38. The winds were light and just as we passed the fleet as we were entering Corpus Christi Bay the winds died completely and a bit of rain began to fall. We motored the next couple of hours to the CC Marina but we stayed dry since they had a full enclosure for the cockpit which they put up for the first time. It was kind of like putting a jig saw puzzle together but the 4 brains managed. Since Teresa is the Chairperson for the BYC dinners we had a chance to discuss the first Dinner that we planned to host at BYC. These are fundraisers for the club so there are lots of logistics to get it all right and be sure to make the membership happy, well fed and fun + make the club a few dollars to boot. See the Port A Cruise pics at http://www.bayyachtclub.org/apps/photos/album?albumid=10840291
Sat. January 29th The Steakley Dinner at BYC
After consulting with old and new the Admiral put together a plan. We shopped on Thursday, fixed it all up on Friday, and even though we had about 15 last minute RSPV's we successfully hosted our first BYC dinner for 60 guests. It is a pretty amazing juggling act managing several chiefs, but the Admiral just put on her gifted & talented hat and made it look pretty easy. We had just started a Non-Inflammatory diet that our daughter Lia sold us on and so we could not even eat most of the food we had prepared. This particular diet has been especially effective at keeping me out of jail since you have to go cold turkey on the Alcohol. The Admiral brought our 1/3 protein; 2/3's vegetable food and we secretly ate that. A couple of days ago I saw an old friend that I have not seen in a couple of years, 189, so the diet is here to stay for a while. See the Pics at http://www.bayyachtclub.org/apps/photos/album?albumid=10882457
When there is no one to go sailing with then the best thing to do is go Birding
Padre Island National Seashore We have been here twice now. Each time is great since you seem to really be out in the birds' wilderness enviornment and not just in a park or somewhere on the edge of town. We are getting pretty good at spotting and identifying several species of raptors. This trip we began to sort out all the shore birds, Is it a Willet, a Godwit, a Yellow Legs, or a Dowitcher, of course it is not a Long Billed Curlew!
We drove to Fulton and checked into a hotel for 3 days of non stop birding:

Day 1 Aransas National Wildlife Refuge, Another great wilderness area. I really like all the Alligators here but unfortunately our trusty camera died on this trip. Our find for this trip though was the Great Kiscadee http://www.oiseaux-birds.com/card-great-kiscadee.html. We were told it is very uncommon for the area http://www.fws.gov/southwest/refuges/texas/aransas/wildlifesee.html
Day 1 & 2 & 3 Goose Island State Park, we went on a 0800 Shore bird tour where are finding ourselves much more independent in identifying all the more common species in the Coastal Bend area. Near here we found a field where we could just drive up and see a family of 3 Whoopers. http://www.tpwd.state.tx.us/spdest/findadest/parks/goose_island/#act
Day 3 Tommy Moore's Skimmer Boat and the Whooping Crane tour in Aransas Bay, Mesquite Bay and the ICW. We saw about 30 Whooping Cranes. My favorite on this tour other than the Whoopers were the Oyster Catchers. See his site at: http://www.whoopingcranetours.com/

The admiral and I can pretty much spot and identify just over 100 species that are either residents of the Coastal Bend or Migrating through. We keep a copy of "The Sibley Field Guide to Birds of Eastern North America" http://www.amazon.com/Sibley-Field-Guide-Eastern-America/dp/067945120X with us always to confirm and discuss our sightings. As spring approaches a lot of the birds are changing colors so we will be tested again to correctly identify our sightings.

Boat Projects still continue but they are just small maintenance or upgrades. I do get to check these off the list however and it all contributes to getting this boat cruise ready. The main project is routing the water that drains from the frig to a pump and out through the sink drain instead of just allowing it to drain into the bilge.
And last but not least we are just in the begining stages of learning how to Tweet...again another requirement by our daughter Lia... ....find us there.
Posted by SNOWBALL at 11:30 AM No comments:

Well we are still in a holding patten waiting to have our new tanks installed. At least we got the drawings/plans for the tanks from RDS for approval and after consulting with Gatewoods there was just one dimension on one tank that needed to be revised. Now the final drawings have to be sent to the US coast Guard for approval since each of the tanks are CUSTOM. Not sure how long this process takes but since we will be moving back aboard the boat at the end of this week I have installed a temporary water tank (5 gallon jerry can) so we can have running hot and cold water on the boat again. It is just a bit to inconvienent to live aboard with out it. Washing dishes by heating water in the microwave and using gallon jugs for dish washing and hand washing and etc. is just to primitive for these Baby Boomer sailors. Now I think I could easily deal with that if I was in a warm island environment if I had to ok, but here at the dock in this winter weather is a bit to much for any more than a few days at a time. The winter Texans have rented our condo through mid April so we will be back on the boat full time.

Thank God for our Bay Yacht Club. I would have been going stir crazy if I could not get my sailing/boating fix.


Well it took several days to complete this post as we were moving back on board. The Admiral has gone to Port A today to do her volunteer work at the Computer Center, I stayed behind to complete this blog, read, and get blown about our slip as the next front is coming in with 30-40 mile an hour winds and a bit of rain. The most Fantastic news is that we heard from Chris yesterday from Gatewoods and our tanks will be manufactrued this week. So I am learning to be patient as It could easily take another 1-2 weeks for delivery, 1 more week to have the 2 part epoxy applied to the tanks and then we need a weather window to take the boat back to Rockport to have them installed. Mid March if all is perfect but more likely end of March is more realistic the way time travels here on the Texas coast.
Posted by SNOWBALL at 11:54 AM No comments: