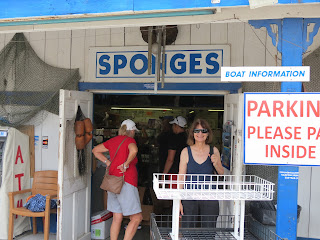 I have several spots to go discover around Tampa and the Admiral has been researching Tarpon Springs. We knew the first trip would be by truck so she kept a close eye on the weather to find a weather window to make the day a success. The summer weather patterns in the central Florida area begin with small bits of rain offshore in the am with a slow build to thunderstorms in the afternoon sometimes beginning as early as 2pm and lasting till dark or so. She read the reviews of the local Greek restaurants and other sights to see. So the first stop was at a Sponge store on the sponge docks that had a free 15 minute documentary on the history of the Tarpon Springs Sponge industry. The Greeks heard about a huge area of sponges in the Gulf of Mexico with Tarpon Springs in the center, so over 60 years ago the Greek fisherman begin to migrate in search of this special resource. It has been written that the closest thing to Greece in the US is Tarpon Springs...I am sure this is accurate. I thought it was just a tourist spot based on old history but this is still a working sponge dock and industry that supports a large Greek culture that is great to spend a day or more in. After viewing the 1950's era film we checked out all the sponges but resisted the urge to buy.We walked out onto the docks in search of a Greek Lunch but the Admiral spotted a boat preparing to leave and realized it was a tour, we quickly bought 2 tickets and They hollered to the boat to wait for us. We ran to get on board this authentic sponge boat. We had no idea what we were about to see or do. Frank the Greek Diver was already partially suited up in the old time divers suit and greeting the passengers. The 79 yr old Greek captain steered the old boat away from the docks and immediately begun to detail the history of what were experiencing. We had a great time on this sponge dive demonstration. The diver brought up a sponge and walked about the deck so everyone could touch it. The Captain never stopped talking in his slow very Greek detail about the life he and his family have lived and continue to live in Tarpon Springs.
Just across the street from the sponge docks is Plaka's...I had a Gyro Sandwich and Lynn had a Greek Salad...Have to go to Greece to get anything that compares.
Then we walked about a block and there was the Tarpon Springs Aquarium, a privately owned very special experience. We saw in less than two hours, a Shark Feeding show, a Python Show, Alligator Show, 2 great touching pools with stingrays, turtles, starfish, lots of other small sea life. and you could put this shrimp parts on the end of a stick and feed the baby sharks yourself...they would jump out of the water to get it!...It was getting getting a bit warm outside after that so just a few steps away was the Wine at the Docks wine Bar so good for me they had beer. We enjoyed the special recliner seating and relaxed with our drinks. We got to talk with the owner about the area and also a young woman who owns the Turtle Cove Marina invited us to bring our boat over...gonna have to do it, has great reviews on Active Captain.
We finished our trip with dinner at Mykonos, We had planned another popular restaurant but the wine Bar owner made the recommendation and we are glad we had the opportunity to talk with her, it was great.

I installed the painted emblems and they look good enough that they will stay that way for a while. Also had two other projects that have been on the list since before we left Corpus Christi but just were not very high on the list. In fact they kept getting moved to the bottom of new list. The pump for the aft shower stopped working shortly before we left Corpus but since the aft shower has been used for storage it has just not been important to fix. Since I have gotten just about everything else done I have started on the bottom of the list and as I started to research how I was going to fix this pump I noticed that a kit to repair it would be almost $80 and the West Marine replacement pump would be about $180, Defender.com about $140 but just on a whim I searched Amazon and I could not believe it but they had the exact replacement pump for $129. For now on I will check Amazon before loading the cart. When you can buy a boat part cheaper than Defender.com and have next day delivery the rest of the suppliers better watch out. The new pump works great but I am not sure when it will be used as a shower again.
Then it was time to deal with the water heater, I have read the owners manual several times. Researched anodes and some water heaters have them and some do not. I looked all over ours and could not figure out if it actually had one since there was not an obvious place where to install one. Finally figured out that the anode is integral to the hot water out connection. Found the part online at raritan and will soon install.

Posted by SNOWBALL at 8:22 PM No comments: