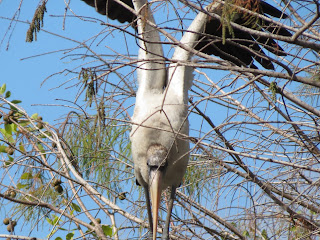 Once I made the decision to add solar panels to Wand'rin Star I knew we would have to go back and get the Little Truck That Can. I would definitely be running around getting all necessary parts to construct a frame and then get the stuff to wire it in. We rented a car at the Marathon airport and took off early to Tampa. We decided to take the Hwy 41 route so we could see a bit of the Florida Everglades along the way. Soon after getting on 41 there was a canal running alongside the Hwy. I think a lot of this was to divert water to neighboring farms for the massive agriculture in South Florida. Anyway we started seeing all sorts of wildlife and Hundreds of alligators We made 3-4 stops along the way and got out to take pics.  Loads of fish, Florida Gars, Bluegill, Walking catfish and tons more species, Birds everywhere. The only thing we did not see was a Panther. But there were Panther Crossings posted along the way. We knew we would be coming back to spend a day in the Everglades later on for sure.

We got to Tampa around 1700 hrs and quickly started making a few stores for things we wanted to bring back. We finished up at Wold Foods and the truck was loaded with new provisions. We drove back to Ft. Myers and found a Hotel for the night then got up early and headed for Miami to buy the panels at Sun electric. Sun Electric is easy to find and Manny Rodriquez hooked us up with two REC Peak Energy (PE) Series Modules 245Watt Black Frame. and PV output-MC4 Male/Female 50' cable http://www.recgroup.com/PageFiles/2422/REC%20PE%20BLK%20UL%20ENG.pdf They boxed it all up and we loaded it up and took off for Marathon.

The Admiral was ready for food, our route back missed the Vegetable Stands near Homestead Florida so she spotted Mrs. Macs Kitchen and had me turn around, glad we did, evidently it is a favorite of tourist and locals alike in Key Largo: http://www.mrsmacskitchen.com/MRS_MACS_KITCHEN_OFFICIAL_SITE/MRS_MACS_KITCHEN_OFFICIAL_SITE.html  She had the Dolphin which is cheap and everywhere in the Keys and I had the Crab Salad, recommend both!

Once I have a boat project like this I get single focused and the Admiral knows I have to put all my attention on the project. After checking out the angled aluminum available at the local home depot I decided that it would be best to have a welder weld the frame that the panels would be bolted to. I asked the Cruisers Net where to find a good welder in Marathon and out of the 5 suggestions Key's Welding got 3 votes. Not only did he do it cheaper than if I bought the material myself and bolted it together, he used heavier material and had it finished in two days! Les than $200, a deal. After that I bought some angled aluminum to construct the supports. I watched how SALT (Sea and Land Technology) installed panels on davits here in Marathon and basically copied their methods. At first I had the whole frame about 22" aft of the dingy davits to limit any shading from other nearby structures on the boat. But after sleeping on it for a while I decided that it would be best to have move it as far forward as possible to increase the stability. Fortunately I was able to move it exactly even with the davits, it clears the Back Stay by about an inch!.I added a couple of 1" SS tubing supports to take as much of the weight off the Davits as possible and let the Stern Pulpit take the load. I am pretty sure it can take a good storm now without problem.